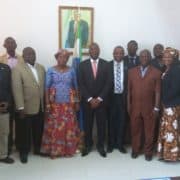 The Director General and Ambassador-at-Large expressed delight over Dr. Marah’s new assignment to the Ministry which she described as a crucial moment in the Ministry’s transformation process. Amb. Khadijatu Basirr underscored that staff of the Ministry hope to benefit immensely from the expertise and wealth of experience of the newly appointed Minister to enhance and project the new foreign relations outlook – Economic and Public Diplomacy. The new outlook she further explained represents the scaling up of the Ministry’s engagement with its partners. She emphasised that trade and investment, and image cultivation which are part of this new foreign outlook, are in line with the national development blueprint: The Agenda for Prosperity. The Director General and Ambassador-at-Large highlighted some of the major challenges in ensuring the successful execution of the Ministry’s new mandate, which include the required financial resources to implement planned programmes. She noted that with concerted efforts and unwavering political will, the Ministry succeeded in creating the much needed impact and difference in its foreign engagements. Ambassador Khadijatu Basirr assured the Minister of the Management Staff’s utmost cooperation and support to ensure a successful tenure of office. The Director General and Ambassador-at-Large presented a copy of the first ever Sierra Leone Foreign Service Transformation Strategy (SLFSTS) 2014-2018 to Dr. Kaifala Marah.

The newly appointed Minister of Foreign Affairs and International Cooperation, Dr. Kailfala Marah expressed thanks and appreciation to the Management and staff of the Ministry for the warm reception accorded him. Dr. Marah further thanked His Excellency Dr. Ernest Bai Koroma for the confidence bestowed on him to the stir the ship of the Foreign Ministry, noting that this is another experience added to his career. His role in the Ministry he said, is to coordinate and/or facilitate the process of attaining the objects of the SLFSTS (2014-2018). He therefore called on staff of the Ministry to work towards the accomplishment of key deliverables in the transformation strategy through collaboration, effective communication and coordination considering the implementation timeframe. Dr. Marah lauded the effort of the outgoing Minister, Dr. Samura M.W. Kamara for laying the solid foundation for the implementation of the transformation strategy and therefore called on the various Divisional Directors to evaluate the current strategy with a view to mapping the way forward for the roll-out of a successor five year strategy.

The vote of thanks was delivered by the Director of the Economic and Technical Cooperation (ECOTEC) Division, Mr. Obai Taylor-Kamara. 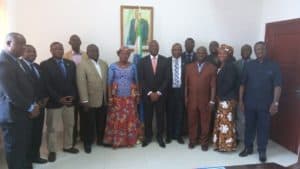