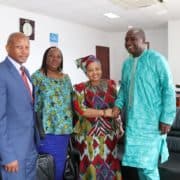 As part of South African commitment to extend intra Africa trade, and to strengthen ties with Sierra Leone; the South African High Commissioner resident in Ghana Ms. Lulu Xingwana has paid a courtesy call on the Minister of Foreign Affairs and International Cooperation, Dr. Alie Kabba at his Tower Hill office in Freetown.

END_OF_DOCUMENT_TOKEN_TO_BE_REPLACED 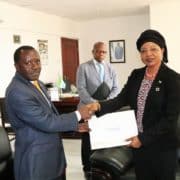 The Uganda High Commissioner to Sierra Leone His Excellency Nelson Ocheger on Monday 10th December, 2018 presented copies of Letter of Credence to the Acting Minister of Foreign Affairs and International Cooperation Mrs. Nimatulai Bah-Chang. The ceremony took place in the Minister’s office, Tower Hill in Freetown. The Uganda High Commissioner conveyed warm greetings from the Uganda Foreign Minister and informed the Acting Foreign Affairs and International Cooperation Minister of Sierra Leone on the commonalities between the two countries in the area of difficult political past. He commended the people of Sierra Leone for the fair and peaceful elections that were held in March this year, describing those elections that brought in new Government as a remarkable achievement. Uganda and Sierra Leone, he explained, have wide range of mutual interest and cooperation. He named mining, agriculture and tourism as some of the areas of interest Uganda will explore for trade and investment. He referred to the Lungi International Airport as a good touristic destination.