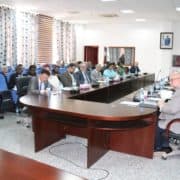 The Foreign Affairs and International Cooperation Ministry has engaged the diplomatic community on the need to promote the Commission of Enquiry. The engagement meeting was held in the Ministry’s conference hall, Tower Hill in Freetown on the 24th January, 2019.

END_OF_DOCUMENT_TOKEN_TO_BE_REPLACED 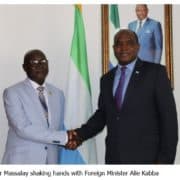 The Sierra Leone Ambassadors to Liberia and United States of America on Thursday 24th January, 2019 bid farewell to the Minister of Foreign Affairs and International Cooperation Dr Alie Kabba at his Tower Hill Office in Freetown. Sierra Leone Ambassador to Liberia accredited to Ivory Coast Mr. Eddie Sidike Massalay in his brief statement expressed hope for success in the execution of his duties. “I will work hard to improve on trade between the two countries in line with my mandate” Ambassador Massalay added.

Mr. Sidike Abu Bakar Wai, Sierra Leone Ambassador to the United States of America accredited to Canada, Brazil, and Jamaica among others thanked President Julius Maada Bio for given him the opportunity to serve the country. He assured the Minister of working hard to mobilize resources that will boost the economy, and live up to the expectation of President Bio’s agenda on trade. He later presented the World Map showing the border between Sierra Leone and Guinea to Dr Kabba.

END_OF_DOCUMENT_TOKEN_TO_BE_REPLACED 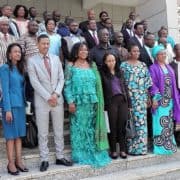 A high power delegation from the Federal Republic of Ethiopia led by the Deputy Prime Minister Demeke Mekonnen Hassen arrived in Sierra Leone on a two days working State visit. The purpose of the visit was to hold a high-level Inter-ministerial meeting with Ministries, Departments and Agencies on bilateral cooperation between the Republic of Sierra Leone and the Federal Democratic Republic of Ethiopia. The Inter-Ministerial meeting took place at the conference hall of the Ministry of Foreign Affairs and International Cooperation, Tower Hill in Freetown on Saturday, 12th January, 2019.

END_OF_DOCUMENT_TOKEN_TO_BE_REPLACED 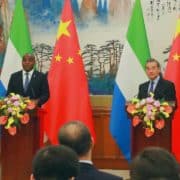 The Minister of Foreign Affairs and International Cooperation Dr Alie Sajan Kabba has lured thirty five million dollars for the Fiber Optic Project in Sierra Leone. The disclosure was made by Dr Kabba from Beijing, China where he is holding bilateral meetings with the Vice President of the People’s Republic of China His Excellency Qishan; State Councillor and Foreign Affairs Minister Yi, Councillor Yang Jiechi, and members of the Political Bureau of the Central Committee of the Communist Party. The money is part of the financial package the Government of China has for President Julius Maada Bio’s Government development priorities according to Minister Kabba, adding that the two Presidents had bilateral discussion on development assistance during the Forum on China Africa Conference (FOCAC) in 2018. The money he stated is meant to improve the fiber optic project and boost Internet service for accessibility and affordable by the common man in Sierra Leone. Therefore he was in China on State visit to engage the Chinese Government on Government of Sierra Leone foreign policy agenda, investment and trade cooperation that will lead Sierra Leone to the path of sustainable economic growth and development.