The Hon. Vice President of the Republic of Sierra Leone, Dr Mohamed Juldeh Jalloh on Friday 28th August, 2020 led Sierra Leone delegation which comprise of the Minister of Foreign Affairs and International Cooperation, Mrs Nabeela Farida Tunis, Minister of Defence, Brigadier (Rtd.) Kellie Conteh and an expert from the Directorate of Africa in the Ministry of Foreign Affairs and International Cooperation, Mr. Yousuf Benga-Sama to ECOWAS virtual Extra Ordinary Summit of Heads of State and Government.

The conference which was summoned, was headed by the Former President of the Republic of Nigeria, HE Goodluck Jonathan to look into the report of the ECOWAS Mediation on the Socio-political in the Republic of Mali.

In his contribution, the Hon. Vice President of Sierra Leone apologised on behalf of His Excellency Brigadier (Rtd.) Dr. Julius Maada Bio who was unavoidably absent due to some other state functions.

He however, cautioned the decision of the ECOWAS with regards the transitional period in order to arrive at a concession with all stakeholders in Mali.

He furthered reaffirmed Sierra Leone’s solidarity with the people of Mali during this trying times and congratulated the President of Nigel who doubles as Chairman of Authority of ECOWAS Heads of State and Government, His Excellency Mohamadu Issoufou for his exemplary leadership in proffering a solution to the Mali crisis.

The Summit was climaxed with key decisions which among them was the resignation of His Excellency Ibrahim Boubacar Keita as President of the Republic of Mali in order to minimize the crisis in Mali, the formation of a transitional government to be headed by a civilian President and civilian Prime Minister and that they should not contest for further elections, the Military should not be at the helm of affairs nor lead the transition government.

The Summit also took note of the prevailing circumstances in Mali and promised to review certain restrictions; ECOWAS and the International Committee should agree on decisions taken by the Authority; the setting up of a committee which should comprise of ECOWAS, AU, UN and other International Organizations to monitor the situation in Mali.

The Summit was pleased with the information of the release of both Mali Prime Minister and Speaker of Parliament by the Junta.

The Chairman of the Authority of Heads of State and Government, His Excellency Mohamadou Issoufou expressed his thanks and appreciations to his colleagues Heads of State for their meaningful contributions in proffering solutions to resolve the Mali crisis and for attending the summit.

The Summit was adjourned to September 7th 2020 in Niamey, Republic of Nigel to further explore necessary avenues to resolve the Mali crisis. 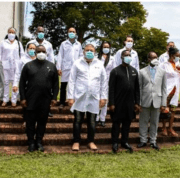 Sierra Leone’s Minister of Foreign Affairs and International Cooperation, Mrs Nabeela Farida Tunis on Tuesday hosted a brief dinner for the sixteen Cuban Medical Specialists who arrived in the shores of Sierra Leone on July 16th, 2020 to help the country fight against the deadly COVID-19 pandemic.

Welcoming the Medical Specialists at the brief ceremony which was held at the Sierra Light House, Aberdeen, Freetown, Minister Nabeela Tunis said their arrival was a long journey with hours of discussions and moments of concerns that have resulted in the Government receiving a very prestigious set of people from a country with which Sierra Leone shares vision with. She reiterated the statement made by His Excellency President Julius Maada Bio.at the Presentation ceremony which was held at State House hat the support given by the Cuban Government indicated their commitment in solidifying the long standing bilateral relations between the two countries.

Minister Tunis said the presence of the Specialists marked the continuation of a journey of interaction and lot of learning experiences that the Government believes will be of benefit to the country. The Foreign Minister assured the Cuban Medical Specialists that their stay would be a memorable one.

The Cuban Charge d’ Affairs in Sierra Leone, Mr. Felix Raul Rojas Cruz in his brief remarks said Sierra Leone was the first country in Africa to have established diplomatic ties with Cuba years back and that the Cuban Government has always been there to answer to the call of Sierra Leone during challenging times.

This the Charge d’ Affairs said is an indication of the strong and cordial bilateral ties that the two countries are enjoy.

The Permanent Secretary of the Ministry of Health and Sanitation said Sierra Leone and Cuba had a common history adding that the coming of the Doctors in Sierra Leone in particular and Africa as a whole is part of the President Fidel Castro’s dream of making sure Cubans and Africans live as one.