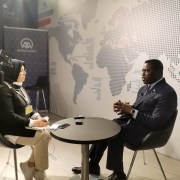 The Minister of Foreign Affairs and International Cooperation Professor David J. Francis in an interview with Anadolu Agency has commended His Excellency President Julius Maada Bio’s Role in representing Sierra Leone on the Global Stage where he presented Sierra Leone as a nation of greater ambition. The three-day high-level event in the resort city of Antalya, brought together participants from 75 Countries, including 17 Heads of State , 80 Government Ministers , and 39 representatives from International Organizations. He said in his interview with Anadolu Agency on the margins of Diplomacy Forum in Antalya on March 12, 2022: Anadolu Agency is the forum’s global communications partner. 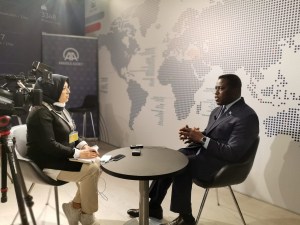 The Minister said that the Antalya Diplomacy Forum is a platform where world leaders in the political, diplomatic, economic and academic sectors share ideas on how to develop innovative diplomacy to address the problems that we face, from climate change, war and peace, conflict resolution and development issues. 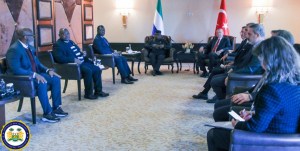 Professor Francis in his interview said now was the time for all the regions of the world to support Africa. He called on all global actors to lead the debate for the reform of the United Nations Security Council, noting that, the UN Security Council has five permanent members and 10 non-permanent members where 70% to 75% of all the issues discussed in the council evolve around Africa.

He said no African Country is represented in the UN Five (5) Permanent Members Security Council, That he referred to as “historical injustice”. He furthered that, African Union has made a determination on this very pertinent issue by appointing Sierra Leone as the Chair of the African Union Committee of Ten on UN Security Council Reform to lead talks on reforming the UN Security Council. So, at this recording diplomacy forum, the Minister made it clear that it was not good just to come and talk but all African Heads of State and delegates translate their talks into actions. 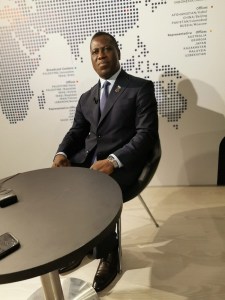 Commending president Bio, Professor Francis noted that at the moment, under the New Direction of H.E President Rtd Brigadier Julius Maada Bio, Sierra Leone is focusing on “human capital development with three pillars: education, health, and agriculture. Today, Sierra Leone spends 22% of our GDP on education. In fact, ‘’we are in the top five countries in the world that allocate more resources to education’’.
He said that with this massive investment in education 2.5 million children are receiving free quality education. He also noted that Sierra Leone has managed the COVID-19 pandemic very well.

‘’ideally, the Ebola epidemic created social consciousness for the people to work with the government, and to comply with the social distancing and health hygiene protocols’’ and that the country is now moving into the post-COVID period where our focus is on strengthening the health system. We will definitely achieve the middle-income status in the next 10 to 20 years. I have no doubt,” he concluded. 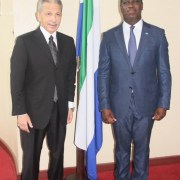 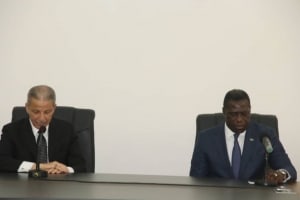 During the meeting, H.E Khattan conveyed the greetings of Custodian of the two Holy Mosques, King Salman bin Abdulaziz Al Saud and His Royal Highness Prince Mohammed bin Salman bin Abdulaziz, Crown Prince, Deputy Prime Minister and Minister of Defense, while the Foreign Minister sent his greetings and appreciation to Custodian of the two Holy Mosques and His Royal Highness the Crown Prince, and his good wishes to the people of the Kingdom of Saudi Arabia of further development and prosperity, stressing that Sierra Leone stands with Saudi Arabia towards various issues aiming at realizing peace and security in Africa. 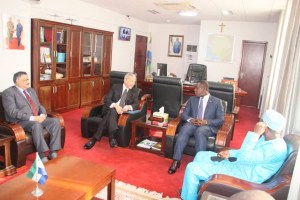 Following the discussions, both the Foreign Minister and H.E Khattan made statements to the media, during which they expressed happiness for the level of relations between the two Countries. 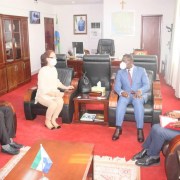 Ministry of Foreign Affairs and International Cooperation, Tower Hill, Freetown, Tuesday, 1st March 2022: The Ambassasor from the Republic of the Philippines to Sierra Leone, Her Excellency Shirley Ho-Vicario and her delegation has on a Courtesy call met with the Minister of Foreign Affairs and International Cooperation, Professor David J. Francis on bilateral engagements. 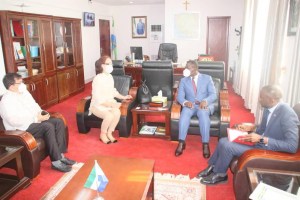 Speaking on the purpose of the visit, Her Excellency Shirley Ho-Vicario stated that her delegation was in Sierra Leone on a scoping mission and to discuss bilateral cooperation between Sierra Leone and the Republic of the Philippines. She tabled the idea of signing a Joint Communique on Technical and Agro-Processing Cooperation, and the possibility of bringing in skilled and qualified expatriates to train Sierra Leoneans especially in the Mining and Agricultural sectors. This initiative, she explained, has helped greatly in growing the economy of the Philippines and enabling the Country to have over 10 million skilled workers all over the world.

Welcoming the delegation, the Honorable Minister, Professor David J. Francis acknowledged the presence of the Philippines Honorary Consul in Sierra Leone as a man with high level commitment for cooperation between the two Countries. He reechoed that, the Government of Sierra Leone is highly interested in Human Capacity Building and therefore signing a Joint Cooperation on Technical and Agro-Processing will be taking the Country to a middle level and not always relying on foreign experts.

Professor Francis assured the delegation of the support of the Foreign Ministry to facilitate engagements with relevant Ministries in the implementation of the proposed Joint Cooperation. 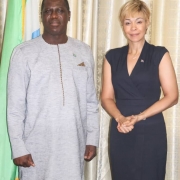 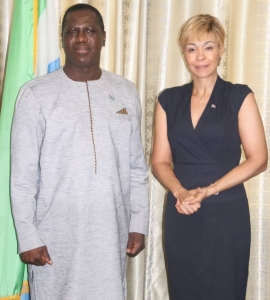 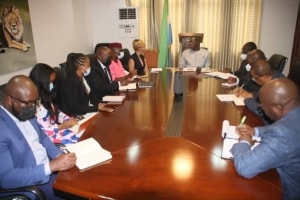 Professor David John Francis in his statement positioned Sierra Leone as a land of opportunities. Referring to Sierra Leone as the most beautiful Country in the world, he said the Country’s potential for investment range from Education, Agriculture, Health, Tourism, Mines, Oil and gas and more. 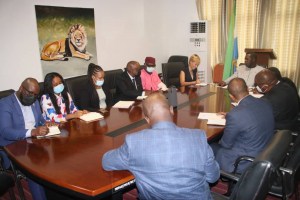 Professor Francis diplomaticly send an invitation through the High Commissioner for south African Investors to tap into the rich Economic Opportunities of Sierra Leone, while assuring them of the Government’s fullest Support. 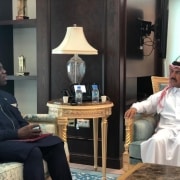 Professor David Francis, Sierra Leone’s Foreign Minister has on Thursday 25th February 2022 engaged Qatar’s Deputy Prime Minister and Minister of Foreign Affairs and Expatriates, H.E. Sheikh Mohammed Bin Abdulrahman Al Thani, on a wide range of bilateral and multilateral issues aimed at strengthening and deepening ties between the two friendly countries.
The Minister while Conveying His Excellency Dr Julius Maada Bio’s warm fraternal greetings to His Highness Tamim Bin Hamad Al Thani, the Emir of the State Qatar, he recalled the visit of HE Dr Julius Maada Bio in April 2018, reckoning the remarkable transformation of the gas-rich country, which inspired him to transform Sierra Leone into a modern international community. 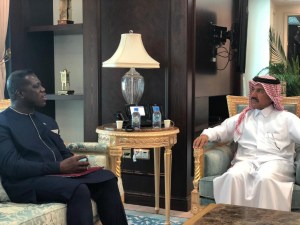 Briefing his Qatari counterpart on the engagement with respective state agencies, he expressed profound appreciation for selecting Sierra Leone as one of the priority countries for the implementation of the economic empowerment project to alleviate poverty.
“Your Excellency, as you may be aware, our country is known for its abundant strategic mineral resources, which have not translated in transforming the nation. Sierra Leone has invested significantly in the Human Capital Development projects of which the Free Quality Education project accounts for 22% of the country’s GPD, providing access to education for two and a half million children nationwide,” Prof David Francis noted. 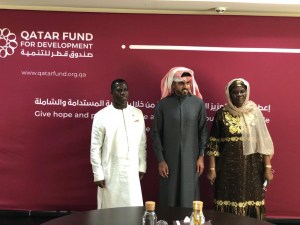 The Hon Minister further described Sierra Leone as a land of investment opportunities, with a lot of untapped potentials in mineral resources, agriculture, energy, trade, among others. He proposed a trade and investment delegation mission to Sierra Leone to get firsthand information on potential investment opportunities in various sectors.
“For the first time in its history, Sierra Leone conducted an Airborne Geophysical Survey to assess the quantum of mineral assets in the country. We are now working with the World Bank to analyse the value of our mineral reserve, which can be used as a sovereign guarantee for capital development projects,” he mentioned. 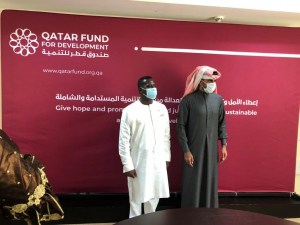 Making a case on the margins of the candidature bid for the non-permanent Category of the United Nations Security Council, which is scheduled for June 2023, he observed that the country has progressed steadily on the international stage, referencing Sierra Leone’s role as Coordinator of the Africa Union Committee of 10 United Nations Security Council Reforms. He concluded by soliciting Qatar’s support as well as its allies as the country has been endorsed unanimously by ECOWAS and AU.
In his response, H.E. Sheikh Mohammed Bin Abdulrahman Al Thani thanked Hon Minister for engaging state agencies on purposeful development. He welcomed the initiative to visit Sierra Leone for investment opportunities. The Deputy Prime Minister further suggested a visit of a team of experts from Sierra Leone to make a presentation to provide Qatari investors the requisite knowledge on Sierra Leone’s investment opportunities.
On Sierra Leone’s bid for a seat in the non-permanent category of the UN Security Council, he assured the Minister of not only voting for Sierra Leone but also providing support in the government’s pre-campaign bid scheduled for 2022.
Other members of the delegation included, Her Excellency Haja Ishata Thomas, the Non-Resident Ambassador to the State of Qatar, Abdul Aziz Turay, Director of Middle East and Asia, Ministry of Foreign Affairs and International Cooperation, Momodu Wurie, Minister Counsellor/HOC and AbuBakarr Mbayoh, Arabic Translator.