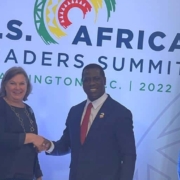 Sierra Leone’s Foreign Minister, Professor David John Francis at a bilateral meeting with Victoria Jane Nuland, U.S. Under- Secretary of State for Political Affairs, has said the practice of democracy has become a challenge in the world today. In the meeting held at the Washington Convention Center, Professor Francis cited the January 6th event that the United States is grappling with, which no longer makes any Country the prophet of democracy. 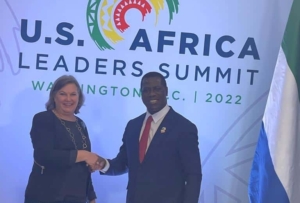 The Minister further informed journalists who were in the United States for the U.S.-Africa Leaders’ Summit that the government of His Excellency President Julius Maada Bio is determined to continue upholding the precept of democracy in Sierra Leone. 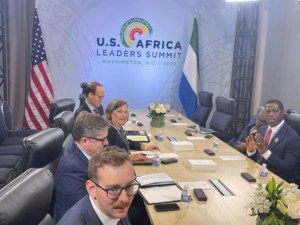 Professor Francis also told the VOA Network that he has informed the U.S. Under- Secretary, Victoria Jane Nuland that Sierra Leone has successfully organized, and funded the midterm census which has given the Country the leverage to plan its development agenda. He further informed the U.S. Under -Secretary of State for Political Affairs during the bilateral meeting that Sierra Leone has introduced a biometric system that will help manage data system for accurate and reliable information. 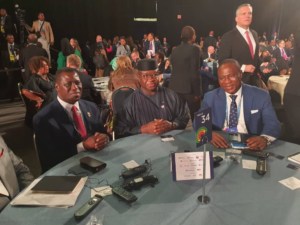 On the conduct of the June 2023 elections, Professor Francis appraised the Under Secretary of State for Political Affairs that Sierra Leone has passed a Proportional Representation system of election in Parliament which will usher in a free, fair, and democratic elections.