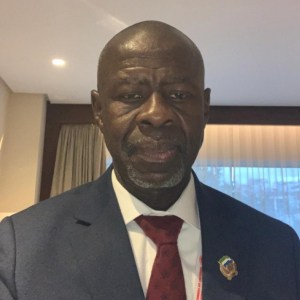 Born on December 29, 1963 at Sendumei, Niawa Chiefdom in the Kenema District, Sulay-Manah Jobo Kpukumu, Deputy Director-General, Policy joined the Ministry of Foreign Affairs and International Cooperation in 1995. Prior to entering the Foreign Service, he briefly served as Research Assistant at the Army Education Services of the Republic of Sierra Leone Armed Forces upon completion of University in 1989 through 1991 before joining the Services Secondary School as full time Teacher and, later taught in various educational institutions, including the National Institute for Vocational Studies, Government Rokel Secondary School and the Alliance Française of Freetown.

On the professional front, Mr Kpukumu, a consummate diplomat, ranks among the fewest of the Ministry and has served in the nations key multilateral diplomatic stations including the Sierra Leone High Commission in London, the Permanent Mission of Sierra Leone in New York and the Embassy of Sierra Leone in Riyadh. In addition, to his vast and accomplished experience in the Foreign Ministry, hefurther served as State Chief of Protocol in the Office of the President.

As delegate of the Sierra Leone delegation to the United Nations in New York, Mr Kpukumu served on a number of Committees including the First, Second, Fourth and Fifth Committees of the UN General Assembly and coordinated resolutions UN General Assembly resolutions on behalf of the Group of 77 and China. He has participated in a dozen of UNGA sessions as well as Summits of the African Union, the Commonwealth and the Organization of Islamic Cooperation (OIC).

He is also a contributor to Global Information Policy, a book published by the Fairleigh Dickinson University Press May 2007 (Edited by Amb. Ahmad Kamal, Senior Fellow UNITAR) ISBN 978-1-60402-358.9.

He is married with three children.