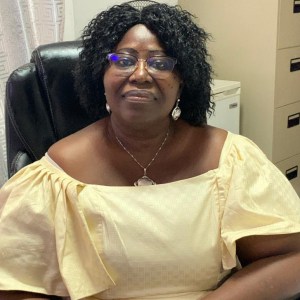 Mrs. Florence N. Bangalie joined the Civil Service on 23rd May, 1993. She is a career Foreign Service Officer with 25 years of experience. Before joining the Civil Service, she worked as a teacher at the Minnie Mull Primary School from 1980 – 1986 and at the Freetown Secondary School for girls from 1991 to 1993. She began her early years in the Service at the Ministry of Education Culture and sports (at that time), as Assistant Secretary Cadet from May 1993 to June 2003. In July 1994 she was deployed at the Student Section in the same Ministry up to March 2003 as the Student Secretary. She was responsible for both internal scholarship (Grants-in-Aid) and external scholarships for undergraduates and postgraduates i.e. Commonwealth, China, Turkey, India, Egypt etc.

In March 2003, Mrs. Bangalie was posted at the Ministry of Foreign Affairs and International Cooperation as Senior Assistant Secretary. She was assigned at the Administration and Finance Division and later as Deputy Director and Director at the Europe Division respectively from 2004 to 2007.

In May 2006, Mrs. Bangalie was posted as 1st Secretary at the Sierra Leone High Commission in London. She assumed duty in February 2007 at the High commission. In 2008 she was promoted to the rank as Deputy Secretary and took over as Ag. Head of Chancery in June 2008 – 2012. With accreditation to six other countries. Mrs. Bangalie returned to Headquarters in October, 2012 after completing her tour of duty at the Sierra Leone High Commission.

In October 2012, Mrs. Bangalie was promoted to act as Permanent Secretary and she was deployed as Director at the Americans and South Pacific Division from October 2012 – June 2013, and Director of Africa Division from July 2013 to June 2015 respectively.

She was promoted as Permanent Secretary in September 2015. Mrs. Bangalie was posted to the Sierra Leone Embassy in the Kingdom of Belgium in 2015 as Minister Consellor and Head of Chancery with accreditations to five countries. The Netherlands, France, Greece, Luxembourg, the Vatican and the European Union (EU) with other accredited organisations like OPCW, UNESCO, ACP etc. She served in that position until 29th January 2020 when she was appointed as the Ag. Director-General of the Ministry of Foreign Affairs and International Cooperation by His Excellency Dr. Julius Maada Bio President of the Republic of Sierra Leone. She assumed duty in that capacity on the 17th February, 2020.