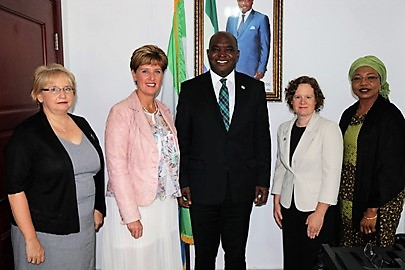 As part of Canada’s commitment to strengthening ties with Africa and to work with the continent to help address the challenges it faces, the Canadian Minister of International Development, Honourable Marie-Claude Bibeau accompanied by the High Commissioner of Canada resident in Ghana, Ms. Heather Anne Cameron has paid a courtesy call on the Minister of Foreign Affairs and International Cooperation, Dr. Alie Kabba at his Tower Hill office in Freetown.

Dr. Alie Kabba, in his welcome statement, underscored the significance of the visit of the Canadian Minister of International Development and team to his Ministry that is aimed at broadening and deepening the existing bilateral relations between the two countries. Dr. Kabba lauded the contributions of the Canadian government in enhancing humanitarian assistance, health including reproductive health and peacebuilding in the country. He further dilated on the long standing bilateral relations between Canada and the Republic of Sierra Leone since 1961. Dr. Kabba on behalf of His Excellency and the people of Sierra Leone expressed his sincere thanks and appreciation to the Canadian government for their support and assistance over the years, especially during the Ebola outbreak to the Republic of Sierra Leone.

Hon. Marie-Claude Bibeau in her brief statement stated that the aim of her visit was to further strengthen the bilateral cooperation between the two countries and to meet with government officials, women leaders and development partners to discuss common priorities such as advancing the rights of women and girls, including sexual and reproductive health rights, sustainable and inclusive development, and peace and security.

EU Head of Delegation and Liberia Ambassador Pay Courtesy Call on Minister of...
Scroll to top