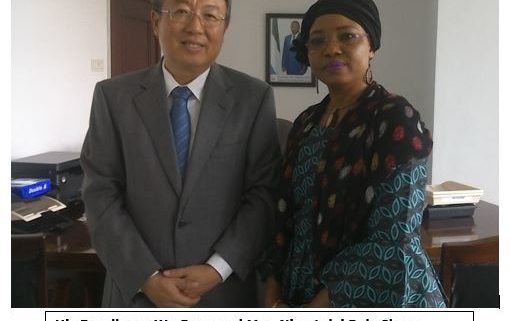 The Chinese Ambassador to the Republic of Sierra Leone, His Excellency Wu Peng and officials of the Chinese Foreign Ministry, today paid a courtesy call on the Deputy Minister of Foreign Affairs and International Cooperation, Mrs. Nimatulai Bah-Chang at her Tower Hill office in Freetown.

The Ambassador, His Excellency Wu Peng extended sincere fraternal greetings and best wishes to the government and people of Sierra Leone, while congratulating Mrs. Nimatulai Bah-Chang for her appointment as Deputy Minister of Foreign Affairs and International Cooperation. ‘‘I am here to further broaden and deepen the existing bilateral relations and to affirm our commitment to agreements reached between the People’s Republic of China and the Republic of Sierra Leone’’,  His Excellency Wu Peng concluded.

The Deputy Foreign Minister and the Chinese Ambassador discussed several issues aimed at enhancing the existing bilateral relations in line with His Excellency Julius Maada Boi’s flagship programme for the country – The New Direction. They further emphasised the need to cooperate on issues of common interest, particularly on economic development. They underscored the significance of broadening their engagements and scaling up cooperation in areas such as Agriculture, Infrastructure and education.

Welcoming the Chinese Ambassador and entourage to the Ministry, Mrs. Nimatulai Bah-Chang underscored the significance of the visit of the Chinese Ambassador, which is aimed at broadening and deepening the existing bilateral relations between the two countries. Mrs.Bah-Chang lauded the contributions of the Chinese government in enhancing the socio-economic development of the country. She further dilated on the long standing bilateral relations between the People’s Republic of China and the Republic of Sierra Leone spanning a period of 47 years. The Deputy Foreign Minister expressed her sincere thanks and appreciation to the Chinese government for their support and assistance to the Republic of Sierra Leone. 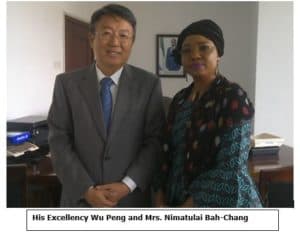 The Minister of Foreign Affairs and International Cooperation meets with the...