Ministry of Foreign Affairs and International Cooperation, Tower Hill, Freetown, 28th October, 2021. The Deputy Minister of Foreign Affairs and International Cooperation, Madam Mamadi Gobeh Kamara has met with the European Union Elections Observer delegation who are in Sierra Leone to follow- up on the gains made in the implementation of the EU recommendations after the 2018 General Elections. 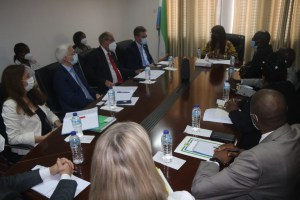 The team was welcomed by the Director General of the Ministry of Foreign Affairs, Mr. Prince E.O Cole, who commended the delegation for their commitment in promoting peace and security in the region.

Presenting the delegation to the Minister, The EU Ambassador, H.E Manuel Mueller thanked the Government for the strides made in promoting human rights and peace.
The head of the delegation, Norbert Nevser, a member of the European Parliament said they were in Sierra Leone in order to engage the Government and the opposition parties on how the recommendations made after the 2018 General Elections have been implemented so far for building a better electoral system. He said the team has already engaged some state institutions, including the National Electoral Commission (NEC), Political Parties Registration Commission (PPRC), and leaders of different political parties in order to see a continuous reform in electoral system in areas of inclusiveness and transparency so that every Sierra Leonean will have confidence in the electoral process. He commended the Government for maintaining peace and promoting national Cohesion. 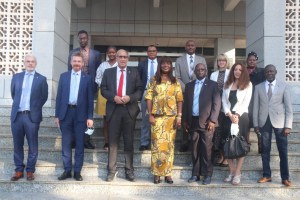 The Deputy Minister in her remarks thanked the delegation for the professionalism exhibited during the 2018 General elections. She assured the delegation of the Government’s Commitment in implementing the recommendations made in 2018. This she said has been demonstrated by the abolition of the seditious libel law and the death penalty from our constitution. She thanked the European Union for it support to Sierra Leone in areas of Agriculture, Education, peace and security.

The Deputy Minister reaffirmed Government’s willingness to implement and follow all recommendations made in the 2018 general elections as a means of upholding the EU share values.