Dr. Alie Kabba-Minister of Foreign Affairs and International Cooperation on Tuesday 16th October 2018 received Letters of Credence from the High Commissioner-Designate of the Republic of Gambia to Sierra Leone and the Ambassador-Designate of the Federal Republic of Germany to the Republic of Sierra Leone at his Tower Hill Office in Freetown. The Minister welcomed the Diplomats on behalf of His Excellency President Julius Maada Bio and the Ministry of Foreign Affairs and International Cooperation. He informed the Diplomats that their appointments reaffirmed the bilateral relationship that has existed between Sierra Leone and the two countries but reiterated that the New Direction Government will deepen the ties with the two countries and expressed hope that the High Commissioner and the Ambassador-Designates serve as a bridge to deepen the bilateral ties that will lead to multilateral development.

Dr. Kabba told the Gambia High Commissioner-Designate that his appointment to Sierra Leone is no coincidence because of the long bilateral relationship that has existed between the two countries from the Colonial days. He enlightened the Gambia Diplomat on the establishment of the Foreign Service Academy meant to train career Diplomats, adding that the Ministry will make use of the knowledge of the Gambian Diplomat when the Academy becomes operational. The appointment of the Chief Executive to Sierra Leone by His Excellency President Adama Barrow shows that President Barrow holds Sierra Leone in a special relationship.

The Foreign Affairs and International Cooperation Minister updated the German Ambassador-Designate about the remarkable progress that has developed in the relationship between the two countries over the years. Germany, the Minister orated, has always come to the aid of Sierra Leone in time of difficulties; he therefore appealed to the ambassador for a strengthened relationship. The Minister is optimistic that the Ambassador will shape the Diplomatic ties between the two countries.

Mr. Ebraima Manneh- Gambian High Commissioner-Designate expressed his delight for the opportunity given him to present his Letter of Credence to the Minister. He explained that Gambia Diplomatic bond with Sierra Leone is stronger than any other country because of the nexus between the two countries stemming from Colonial period when the two countries were governed as one Colony by the British. He stated that Sierra Leoneans were sent to work in Gambia by the British Colonial Masters, he further explained that because of the Krio language which is spoken in Banjul the Capital City of Gambia and Sierra Leone; he sees his appointment as the greatest pleasure to come back home.

The German Ambassador-Designate to Sierra Leone Mr. Horst Gruner told the Minister that his stay in the country will foster the good relationship between the two countries and said he is happy to present his Letters  of Credence to the Minister. 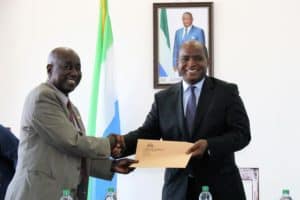 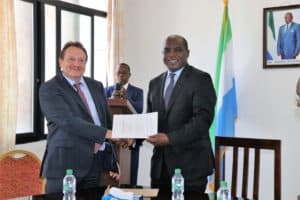 The Minister of Foreign Affairs and International Cooperation Calls for Global...