Ministry of Foreign Affairs and International Cooperation, Tower Hill, Freetown, 21st July, 2022. A delegation from the African Union–ECOWAS mission to Sierra Leone have today met with the Minister of Foreign Affairs and International Cooperation, Professor David John Francis, to brief him and discuss the progress made from their engagements with various institutions that has to deal with boarder issues in the Country. 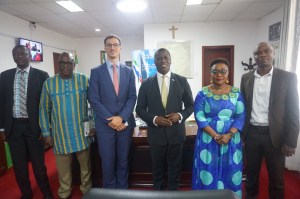 Mr. Saffa Kanneh, the Deputy Head of Delegation said their engagements was as a result of a correspondent received from the AU to collaborate with ECOWAS and GIZ in order to give support on boarder Management in Sierra Leone. He said they have met with critical MDA’s like the Ministry of Internal Affairs, Ministry of Defense, the Office of the National Security and the Ministry of Planning and Economic Development, on issues relating to border delimitation and demarcation. Focusing on cross border cooperation, experience sharing and capacity building. Taking into account the African Union border Governance policy that centers around community integration on border approach. 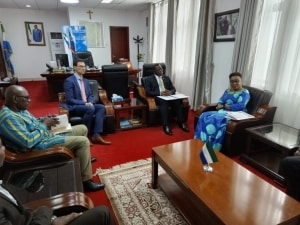 Welcoming the delegation, Professor Francis thanked the team for their engagements with the various MDA’s in trying to understand and identify the progress made in handling border issues by the Government.

“To me, Border issues goes beyond security threats, It is a developmental issues, since people along the borders interacts on a daily basis in areas of trade, inter-marriages and other social issues.” 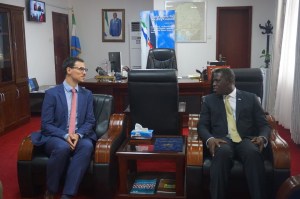 Professor Francis recommended for a policy shift in our border issues through the establishment of a National border Commission and a joint border Committee among the Mano River Union Countries.

He reaffirmed the Government of Sierra Leone’s commitment on border management with it neighbours and to strengthen cross border cooperation with local communities in the border areas for peaceful co-existence.

In attendance was the Director General and Ambassador at Large, in the Ministry of Foreign Affairs and International Cooperation, Mrs. Victoria Sulimani.