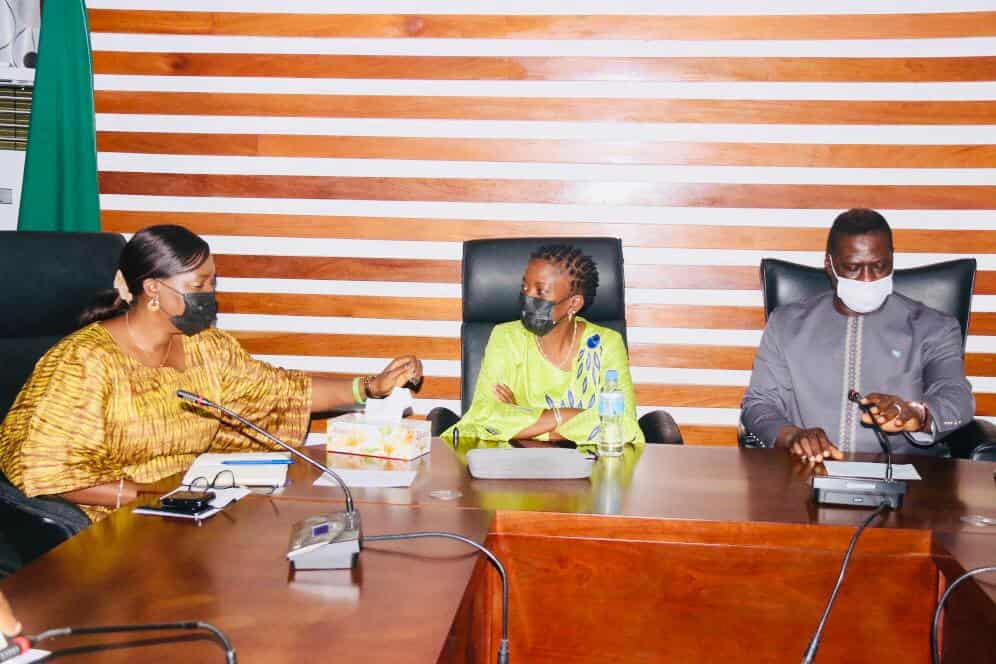 In her Handing over statement at a ceremony held at the Ministry’s main Conference Hall, Tower Hill, Freetown, the Outgoing Minister of Foreign Affairs and International Cooperation, congratulated her successor, Prof. David Francis on his new appointment as Minister of Foreign Affairs and International Cooperation and expressed hope that he might found the handing over note useful as he begins a new chapter in the history of the Ministry.

Giving a summary of some of the activities she undertook during her tenure as Foreign Minister, the outgoing Minister, Mrs Nabeela Farida Tunis, said in May 2019, it pleased His Excellency, Dr Julius Maada Bio to re-assign her as the Minster in charge of Foreign Affairs and International Cooperation and that at that time, she developed some understanding of enormity leading the country’s diplomacy in a changing hegemony of world order in which Sierra Leone is a small and less powerful player.

The outgoing Foreign Minister pointed out that, the broad vision of His Excellency President Dr Julius Maada Bio is to use trade and investment as critical drivers to accelerate sustainable growth and development in several sectors such as education, health, energy and infrastructural development among others. To that end, she stated, together with her team she figured out that rebranding the image of the country from a war ton, disease driven and backward state into a peaceful, beautiful, resourceful and determined nation with smart people at the centre was going to be a critical point of departure for attracting valuable and credible foreign direct investment as well as cementing the position of the country as a genuine partner in the international system.

On institutional Reform and strengthening, she said after brief assessment of the structure and capacity of the Ministry, she and her staff concluded that there was a strong need for institutional and systems reset to reflect the global dynamics and ultimate objectives of His Excellency, Dr Julius Maada Bio.

In essence, the Former Minister stated that the Ministry successfully concluded a Management and Functional Review exercise which she said commenced in December, 2018 under the leadership of her predecessor, Dr Alie Kabba, to strengthen the capacity of the Ministry as well as improve on the effectiveness and efficiency of work processes.

She said they created additional structures such as the Situation Room, Diaspora Division, C-10 Secretariat among other structures.

Mrs Tunis maintained that during her tenure, she and her team succeeded in accelerating the timely and constant flow of information between the Missions abroad and the Ministry, the swift responses to correspondence from partners, friend and other government agencies; the improve coordination of Sierra Leone’s participation in international conferences, better reception provided to visiting high profile delegations, induction trainings for Ambassadors and staff post to the country’s Missions abroad, the introduction of Performance Management Assessment for Ambassadors and regular virtual meetings with Mission staff among others.

The outgoing Foreign Minister reported that less than two years in office, she succeeded in giving out opportunities to staff of the Ministry to benefit from diplomatic capacity trainings from in person to language skill development and interactive sessions in which Senior Directors mentored junior staff on economic, political and public diplomacy.

This she said enabled staff to break down barriers and took significant steps towards being competitive on the international stage.

As a Minister, she said she succeeded in facilitating the expedition of the physical construction of the National Foreign Service Academy. Within 100 days in office, she said she succeeded in luring development partners to assist the Ministry with VVIP Vehicles, refurbishing of the Presidential and VIP Lounges at the Lungi International Airport, the construction of Staff quarters at Lungi for Protocol staff.

On Diplomatic expansion, Mrs Tunis said, she and her team succeeded to establish new missions in Turkey and Morocco and talks are on an advance stage for the establishment of an Embassy in France.

She added that she also superintended the establishment of Consulates in several economically viable cities, and that several countries have also shown keen interests in opening their diplomatic Posts in Freetown, Sierra Leone while India has already established its Mission.

She noted that in the areas of Bilateral Agreements and Joint Commission for Cooperation, in less than two years, she and her team have succeeded in ensuring that Diplomats and professionals in Sierra Leone can now travel to some countries Visa free; and also succeeded in the lifting of the blanket visa ban on Sierra Leone by the United States of America.

She said as a team they succeeded in winning elections at the international level for the former Sierra Leone UN Permanent Representative, Dr Alie Kabba, Justice Miatta Samba and ACC scribe, Francis Kelfala.

She concluded by outlining some of her challenges faced during her tenure as Foreign Minister.

In his response, the Incoming Minister, Prof. David J. Francis profoundly thanked the Outgoing Minister, Mrs Nabeela Farida Tunis for taking her time to give a detailed outline of the substantive issues achieved in twenty-three (23) months, those to be achieved and the challenges and congratulated her on her new assignment as Regional Minister West.

Minister Prof. Francis said the catalogue of achievements outlined by his predecessor is a testament of her impressive leadership of the Ministry for the past 23 months.

On the issues outlined, Minister Prof. Francis said he has been involved in all from the margins, supporting his predecessor in mobilizing and driving majority of the successful issues she had outlined and that it is a sound foundation he would start with as a Foreign Minister.

He said he was pleased to inherit a very sound foundation with a solid team, and that one thing the Senior Management had made clear to him and the Deputy was that they have come to a family setting.

Speaking on his role as the political lead supported by the Deputy Minister, Foreign Minister Prof. Francis said he has come to encourage and consolidate the family orientation to ensure that staff focus on competence, professionalism, discipline, and service delivery.

Foreign Policy, he told his predecessor, is not static and that it is dynamic as it responds to changing challenges of time.

In 2018, he furthered, His Excellency President Bio aligned his Foreign Policy vision to Economic Diplomacy. Three years on, a Management and Functional Review with extensive consultations has propelled a shift in Foreign Policy posture that would reflect a Development blue print derived from the Manifesto commitment, the Medium Term Development Plan and the flagship human capital development programme.

High Commissioner-Designate of Nigeria Presents Copies of His Letter of Credence...