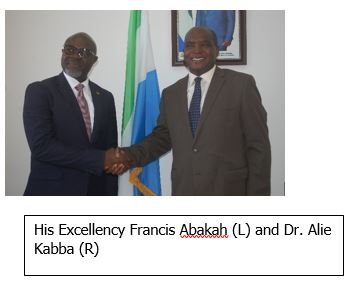 The Ghana High Commissioner, His Excellency Francis Abakah accompanied by the Head of Consular Tsotsu Selormey to the Republic of Ghana,  today paid a courtesy call on the Minister of Foreign Affairs and International Cooperation, Dr. Alie Kabba at his Tower Hill office in Freetown.

The Ghana High Commissioner, His Excellency Francis Abakah on behalf of the government and people of Ghana extended sincere fraternal greetings and best wishes to the government and people of Sierra Leone, while congratulating Dr. Alie Kabba for his recent appointment as Sierra Leone’s Minister of Foreign Affairs and International Cooperation. ‘‘I am here to further broaden and deepen the existing bilateral relations and to affirm our commitment to promote trade and other economic cooperation agreements between the Republic of Ghana and the Republic of Sierra Leone’’, His Excellency Francis Abakah stated.

The Ghana High Commissioner further emphasised the need to cooperate on issues of common interest, particularly on education and to enhance the ECOWAS Trade Liberalisation Scheme (ETLS) which is the main ECOWAS operational tool for promoting the West Africa region as a Free Trade Area.  He underscored the significance of broadening their engagements and scaling up cooperation in areas such as Agriculture, education and Good Governance.

Welcoming the Ghana High Commissioner and entourage to the Ministry, Dr. Kabba underscored the significance of the visit of the H.E. Francis Abakah which is aimed at broadening and deepening the existing bilateral relations between the two countries. Dr. Kabba lauded the contributions of the Ghanaian government in enhancing peace and stability in Sierra Leone particularly, during the civil war in 1998. He further dilated on the long-standing bilateral relations between the Republic of Ghana and the Republic of Sierra Leone spanning a period of over two centuries. Dr. Alie Kabba expressed his sincere thanks and appreciation to the Ghanaian government for their support and assistance to the Republic of Sierra Leone during the Ebola scourge in 2014-2015 and the mudslide and flood disaster that struck Freetown on August 14, 2017.

‘This visit is of great and far-reaching significance to deepening the new type of strategic partnership between Chana and Sierra Leone and strengthening solidarity and cooperation among the two developing countries in the new circumstances, Dr. Kabba concluded.

The Foreign Minister and the Ghana High Commissioner discussed several issues aimed at enhancing the existing bilateral relations that will serve as a blueprint for other nations in Africa. They underscored the significance of broadening their engagements and scaling up cooperation in areas such as Agriculture, Local Governance and Education. Present at the meeting were: the Director General, M r. Paul Minah; the Directors for Europe and Africa Divisions of the Ministry of Foreign Affairs and International Cooperation, Mr. Witsin T. Yankuba and Mrs. Josephine Sia Hawa Fallah. 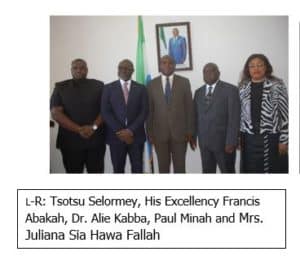 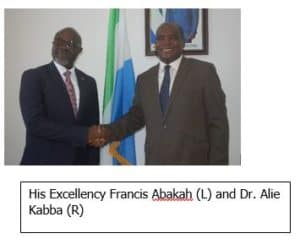 NATIONAL CONSULTATION ON THE GLOBAL COMPACT ON MIGRATION
Scroll to top