High Commissioner-Designate of the Republic of Nigeria to the Republic of Sierra Leone, His Excellency Henry John Omaku on Monday 10th May, 2021 presented copies of his Letter of Credence to the Minister of Foreign Affairs and International Cooperation, Prof. David Francis at his office, Ministry Foreign Affairs and International Cooperation, Tower Hill, Freetown.

Welcoming High Commissioner-Designate, His Excellency Henry John Omaku to the Republic of Sierra Leone, Prof. David Francis intimated the envoy that as the new Minister of Foreign and International Cooperation, he had brought to the Foreign Ministry a clear understanding of the priorities of the ‘New Direction’ Government of His Excellency, President Dr Julius Maada Bio.

Minister Prof. Francis went on to brief the High Commissioner-Designate on the new foreign policy shift from Economic Diplomacy to Development Diplomacy.

Development, he said, is the national interest of the “New Direction’s’ Government and that it is derived from the manifesto commitment and manifested in the Medium Term National Development Plan, the flagship human capital development of President focusing on education, health, agriculture and food security.

The shift, the Foreign Minister said, would focus on positioning the country as a small but inspiring and emerging country that is smart to focus on free education and to invest in long term sustainable future of the country as the new shift would look at strategic relationships with other countries.

Sierra Leone and Nigeria he said have had a strong cordial relationship that has spanned decades, and as the new Foreign Minister, he is going to continue to strengthen the bond between the two countries and that of the two Heads of States, their Excellencies, President Dr Julius Maada Bio and President Muhammad Buhari.

Minister Prof. Francis called on the High Commissioner-Designate to partner with Sierra Leone especially in the area of the training of diplomatic staff of the Foreign Ministry .

High Commissioner -Designate Omaku assured the Foreign Minister that he is in the country to put up his best in continuing to strengthen and deepen the already existing bilateral ties between Nigeria and Sierra Leone.

Speaking on his new role, he promised to partner with Sierra Leone, add value and bring in new innovations to ensure that things change in the right direction between the two sister countries with a view to creating an enabling environment for interaction and sharing ideas that would benefit the peoples of both countries. 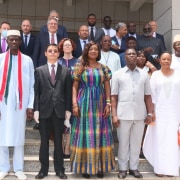 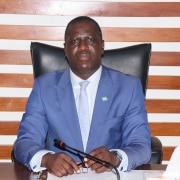 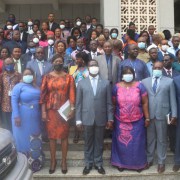