The Resident Ambassador for Ireland to Sierra Leone and Liberia, Her Excellency Catherine Campbel, has paid a courtesy call on the Minister of Foreign Affairs and International Cooperation, Dr. Alie Kabba at his Tower Hill office in Freetown.

According to Ambassador Catherine Campbel, her visit is to enhance and deepen the existing partnership and bilateral relations between Ireland and the Republic of Sierra Leone. The Irish Ambassador extended fraternal salutations from the Government and people of Ireland to the Government and people of Sierra Leone. She also presented a congratulatory letter from the Irish Government to the Minister of Foreign Affairs and International Cooperation for His Excellency, President Julius Maada She underscored her Government’s continuous assistance and support to Sierra Leone.

The Foreign Minister welcomed the Resident Ambassador for Ireland to Sierra Leone and Liberia to the Ministry and assured her of the full support of the Ministry of Foreign Affairs both at bilateral and multilateral levels.

Some of the issues discussed among others focused on strengthening and deepening bilateral relations in the areas of girl child education, food and nutrition for lactating and pregnant women, as well as the people to people relations between Ireland and Sierra Leone.

Present at the ceremony were: the Director General, Mr. Paul Minah; the Directors for Europe and Multilateral Divisions of the Ministry of Foreign Affairs and International Cooperation, Mr. Witsin T. Yankuba and Mr. Franklyn Fawundu; the Head of Irish Aid Sierra Leone, Mary O’Neill; and the Acting Deputy Director of Protocol of the Ministry, Mr. Alhassan Kargbo. 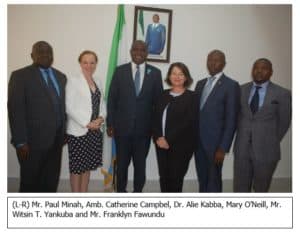 NATIONAL CONSULTATION ON THE GLOBAL COMPACT ON MIGRATION