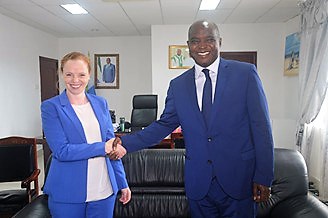 The Ambassador of Ireland resident in Sierra Leone, Her Excellency Catherine Campbell has paid a courtesy call on the Minister of Foreign Affairs and International Cooperation, Dr. Alie Kabba at his Tower Hill office in Freetown.

According to Ambassador Catherine Campbell, her visit is to enhance the diplomatic efforts of the Government of Ireland and to further deepen and strengthen the existing partnership and bilateral relationship between Ireland and the Republic of Sierra Leone. She further informed the Minister of Ireland’s new policy for international development, “One World One Future” of which Sierra Leone is one of the nine key beneficiary countries worldwide, which supports the government’s new directions policy of “leaving no one behind”. “The Irish government in our five years mission strategic plan (2019-2023) will continue to provide more support to girl child education, agriculture, nutrition, food security, gender, health, youth employment, crisis monitoring, human rights initiatives and governance through political, economic and technical cooperation in the areas of common interest”, Ambassador Campbell concluded.

Welcoming the Irish Ambassador to the Ministry, Dr. Alie Kabba underscored the significance of the visit of the Ireland Ambassador to his Ministry, which is aimed at broadening and deepening the existing bilateral relations between the two countries. Dr. Kabba lauded the support of the Irish government in enhancing the socio-economic development of the country through innovative cooperation and business development initiatives. He further dilated on the long-standing bilateral relations between Ireland and the Republic of Sierra Leone that has spanned for over one hundred years. Dr. Kabba on behalf of His Excellency and the people of Sierra Leone expressed his sincere thanks and appreciation to the Irish government for their support and assistance to the Republic of Sierra Leone over the years.