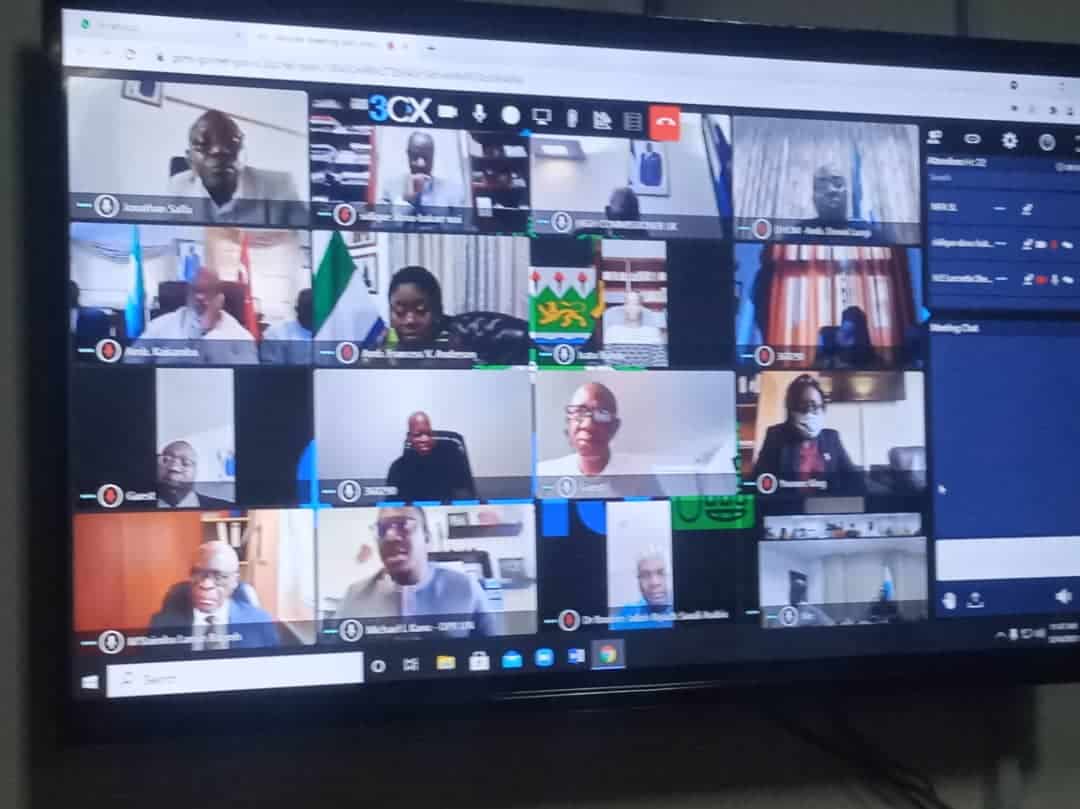 The Minister of Foreign Affairs and International Cooperation, Professor David J. Francis on Friday 14th May 2021 held his first virtual meeting with the Sierra Leone Ambassadors and High Commissioners abroad at the Ministers Conference Room, Tower Hill, Freetown to present the new political leadership of the Ministry as well as the country’s new Foreign Policy shift from Economic Diplomacy to Development Diplomacy.

Welcoming the Ambassadors and High Commissioners, the Acting Director General-Operations serving in the capacity as Director General, Mr Sulay-Manah Kpukumu said the meeting was summoned by the new political leadership to share His Excellency’s vision for the Ministry of Foreign Affairs and International Cooperation on the shift of Sierra Leone’s Foreign Policy, from Economic Diplomacy to Development diplomacy and, also to share the expectations of the new leadership outreach activities, innovations and challenges etc of the Missions abroad.

In her statement, the Deputy Minister of Foreign Affairs and International Cooperation, Madam Mamadi Gobeh Kamara expressed fraternal greetings to the Ambassadors and High Commissioners on behalf of the Minister, Prof. David J. Francis.

She described the maiden meeting between the new leadership and the Heads of Mission as a means of stimulating constructive engagement between Headquarters and the Missions abroad, and that the process of interaction would become the new leadership’s main stay in order to ensure trust and partnership between the Ministry and the Government.

Madam Mamadi Gobeh Kamara furthered that, the new leadership would build interest in and give renewed impetus to boosting the country’s Foreign Policy credentials.

She expressed gratitude for being part of the team that would build and give meaningful impact in moving the Ministry ahead.

Speaking on her new role as Deputy Minister of ForeignAffairs, Madam Gobeh Kamara told the meeting that she had been tasked to ensure compliance on number of issues particularly the roll out and implementation of existing bilateral and technical cooperation agreements between the Government of Sierra Leone and Governments of host countries.

The Deputy Minister of Foreign Affairs said she is going to work on Network Diplomacy which according to her is embedded in the overall objectives of the Ministry in terms of creating and maintaining credible information flow to the public.

She called on the Heads of Mission to work collectively and collaboratively with the new leadership of the Ministry in order to achieve President Bio’s Foreign Policy drive.

Giving the Keynote address, the Minister of Foreign Affairs and International Cooperation, Prof. David J. Francis said the meeting is to engage with the Ambassadors and the High Commissioners on the relevant role they play in portraying Sierra Leone in the international arena for catering for the interests of Sierra Leoneans abroad.

Foreign Minister Prof. Francis updated Ambassadors and High Commissioners on the activities he had embarked on with senior management and staff of the Foreign Ministry, members of the Diplomatic and Consular Corps and the Media to introduce the new political leadership, the Foreign Policy posture and the new shift in the country’s Foreign policy and the expectations they would like to see going forward.

The Foreign Minister Prof. David J. Francis explained that he had brought to the Foreign Ministry three objectives: a clear understanding of President Bio’s vision of the foreign policy approach; adherence to procedures, directives and principles of international cooperation and to strategically align the President’s vision with that of the Ministry of Foreign Affairs and International Cooperation which include monitoring and supervising of the functions of the Ministry.

He added that the Deputy Minister brought to the Ministry media engagement, strategic communications and how to build an ICT platform virtually.

The Foreign Minister explained that the shift from Economic Diplomacy to Development Diplomacy is inspired by a gradually shrinking global desire for development assistance and foreign aid. A movement he said that had been obliged by donor promotion of the concept of ‘Trading out of Poverty’; the global COVID-19 pandemic and the international economic and financial crunch and, the attendant disturbing impact on foreign aid to least developed and low income countries.

The Minister highlighted that the new Diplomacy posture aims at achieving Sierra Leone’s Development priorities and aspirations outlined in the Mid-term National Development Plan; the Human Capital Development flagship programme and the SLPP People’s Manifesto Commitment and that at the core of the new Development Diplomacy, is also the primary focus on Trade & Investment in all of Sierra Leone’s bilateral and multilateral foreign relations and diplomatic exchanges.

The session was climaxed by discussions from Heads of Missions on the way forward in promoting the new shift.

In attendance were Directors and Deputy Directors of the various Directorate of the Ministry.