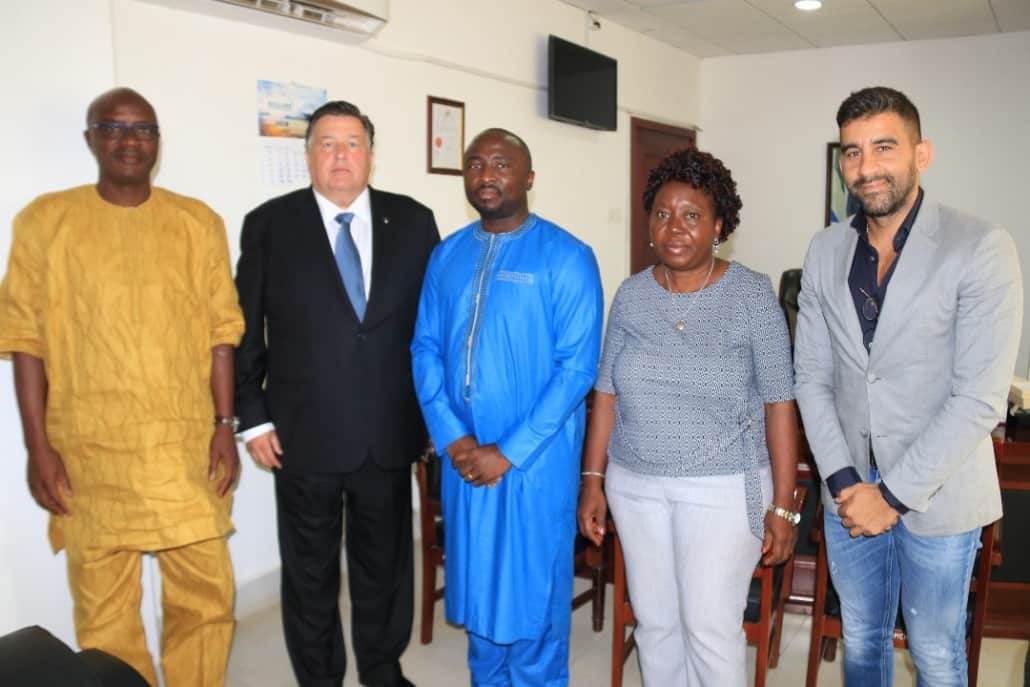 Representatives from Norway on Thursday 30th May, 2019 paid a courtesy call on the Acting Minister of Foreign Affairs and International Cooperation Hon. Solomon Jamiru Esq at his Tower Hill Office in Freetown to discuss and strengthen the bilateral cooperation between the two countries.

The Head of the team, Mr. Hans J Hoiskar, Chairman of Norway Petronor, said they were sent by the President of Norway to strengthen and deepen the bilateral relations between the two countries and to elucidate the shared common interests of the two countries as ocean nations with coastline along the Atlantic Ocean. Norway, he said is a maritime nation and has built up wide-ranging know-how on energy, oil and gas and maritime resources.

Mr. Hoiskar maintained that, his country had developed a technology system for sustainable development of their natural resources; adding that their areas of expertise include renewable hydropower, fish and seafood, offshore oil and gas production and fisheries and energy aid to developing countries.

He disclosed that, Norway derived more financial revenue from the sale and export of fish and fishery products than from the sale of oil and gas. Mr. Hoiskar informed the acting Minister that Norway has donated export materials to the Ministry of Marine and Fishery Resources. He assured the minister that, as a private citizen of his country working as a volunteer, he can help set up a meeting and see how they can bring more support to the people of Sierra Leone.

In his response, the Acting Minister Hon. Solomon Jamiru Esq, heartily welcomed the representatives to the Ministry on behalf of the Government of President Brigadier Julius Maada Bio and the people of Sierra Leone. Hon. Solomon Jamiru Esq noted that developing the marine and oil industries are among the core priorities of the ‘New Direction’ Government and that the Government of His Excellency Dr. Julius Maada Bio has opened the bid for oil and gas exploration.

The Hon. Acting Minister recalled that, during the last session of the AU Summit in Addis Ababa, the President of the Republic of Sierra Leone, and Norway’s Prime Minister held a fruitful meeting on issues of bilateral cooperation and to explore some kind of cooperation in the near future. He expressed delight on Norway’s desire to share its expertise in oil and gas with Sierra Leone.

This the Acting Minister Solomon Jamiru said, would certainly assist the country to diversify its economy. The Acting Minster concluded by reassuring the delegation from Norway that the Government of H.E President Julius Maada Bio would encourage more collaboration with Norway in developing Sierra Leone’s Mineral and Fisheries industries. Present were the Director General of the Ministry of Foreign Affairs and International Cooperation Mr. Al-Hassan Kondeh and the Director of Europe, Madam Sia Tejan.

WHO Country Rep Presents Letters of Credence to Acting Minister of Foreign ...
Scroll to top