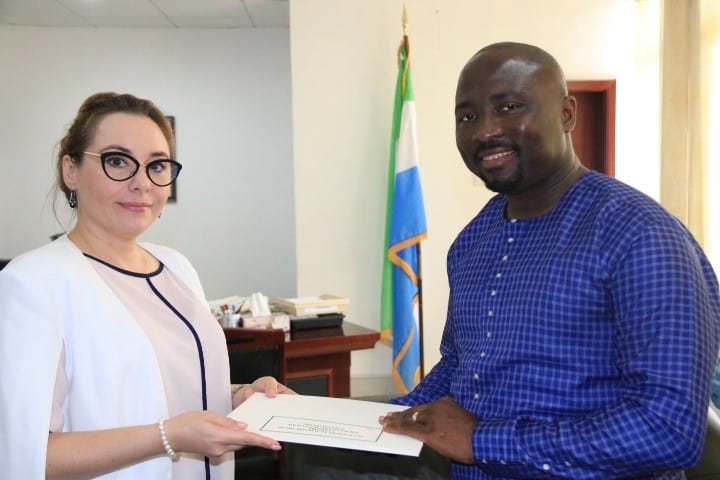 The Polish Ambassador designate to the Republic of Sierra Leone, Mrs. Joanna Tarnawska on Wednesday, 19th June, 2019 presented copies of her Letters of Credence to the Deputy Minister of Foreign Affairs and International Cooperation, Hon. Solomon J. Jamiru Esq, at his Tower Hill Office in Freetown.
Speaking at the ceremony, Mrs. Tarnawska expressed her excitement to be assigned as Polish Ambassador to Sierra Leone. She stated that Poland and Sierra Leone are far away in terms of geographic location, but have common values.
The Polish Ambassador designate to Sierra Leone said her government is committed to strengthen and deepen the bilateral ties with the Government of Sierra Leone, adding that Sierra Leone was among the first one hundred countries to sign the Warsaw treaty in Poland.
Speaking on her country’s interest of cooperation, Mrs. Joanna Tarnawska said her country is interested to cooperate with Sierra Leone on the basis that, Sierra Leone is recognized as one of the growing democratic nations in the world. She said that there are many areas of cooperation that her country is interested in, including education, cleaning, transportation, technology and many others.
She maintained that her country has also developed cooperation in different sectors like education, teaching aid, firefighting, rescue crises including landslide and car accidents.
In his response speech, the Hon. Deputy Minister of Foreign Affairs and International Cooperation, Solomon J. Jamiru Esq welcomed the Ambassador Designate to the country and the Ministry, adding that Poland is a great nation in central Europe.
He noted that Poland is a member of a lot of multilateral agencies including UN, NATO and Schengen that have strategic global significance.
Responding to the Ambassador’s country interest of cooperation, Hon. Solomon Jamiru said, the two countries will have to look at areas of cooperation that could benefit both peoples.
He informed the Ambassador Designate that, His Excellency the President Julius Maada Bio for the first time in the history of this country, has set up a Directorate for Science, Technology and Innovation, to ensure students who study Mathematics, Science and Technology in the Universities of Sierra Leone would attract government support and free tuition.
Deputy Minister Jamiru Esq also noted that Poland has evolved when it comes to Public Postal Service, and would have to help develop that sector with Sierra Leone.
Sierra Leone he maintained, has a Postal System that has gone through a lot of challenges and that it is at a point wherein they needed to borrow best practice and perhaps support in the area of resources, technical resources in order to transform the country’s Postal Services into providing financial services.
This, he concluded is the time for the two countries to deepen and strengthen their bilateral ties.
In another engagement, the Hon. Deputy Minister of Foreign Affairs, Solomon J. Jamiru Esq. on Thursday, 20th June, 2019 presented two Ambassadors and a High Commissioner Designate to Sierra Leone, to His Excellency Rtd. Brigadier Julius Maada Bio to present their Letters of Credence at the State House in Freetown.