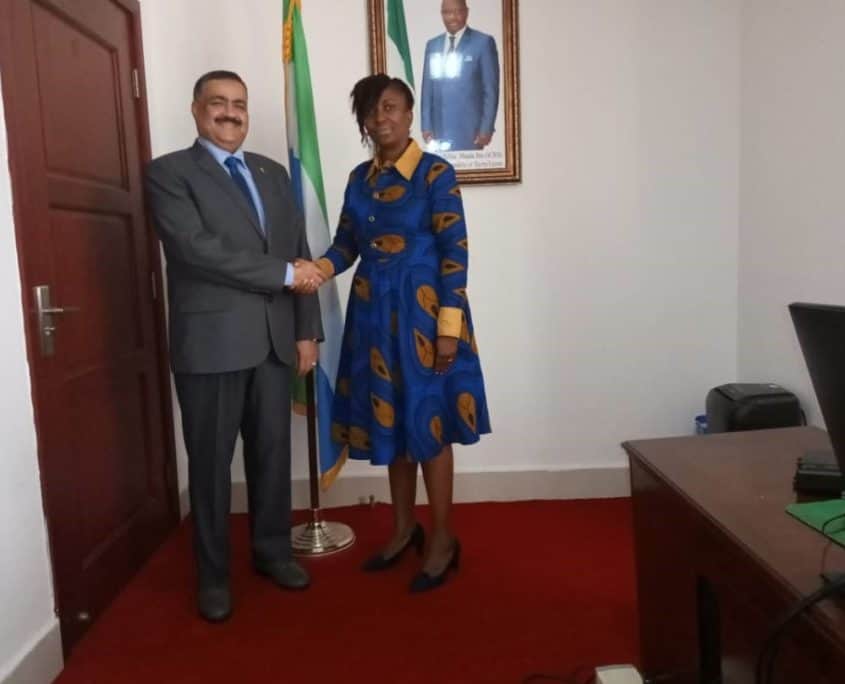 The Kingdom of Saudi Arabia Ambassador designate to the Republic of Sierra Leone, His Excellency Dr. Hussain Nasser Aldakalallah on Wednesday, 31st July, 2019 presented copies of his Letters of Credence to the Minister of Foreign Affairs and International Cooperation, Hon. Nabeela Tunis, at her Tower Hill Office in Freetown.

Speaking at the ceremony, which was held at the Minister’s Conference Room, Ministry of Foreign Affairs and International Cooperation, His Excellency Dr. Hussain Nasser Aldakelallah expressed his enthusiasm to be assigned as Saudi’s Ambassador to the Republic of Sierra Leone.

In her response, the Minister of Foreign Affairs and International Cooperation, Mrs. Nabeela Tunis said Sierra Leone and the Kingdom of Saudi Arabia are riding the pinnacle of admirable bilateral ties.

The Minister said Sierra Leone has benefited tremendously from Saudi in the areas of education, agriculture, infrastructural development, health, Hajj scholarships among other sectors, adding that, her government is very thankful for Saudi’s assistance during the deadly Ebola scourge.

Hon Nabeela Tunis and His Excellency, Dr. Hussain Nasser Aldakelallah discussed a range of diplomatic topics and issues of common concern between Sierra Leone and the Kingdom of Saudi Arabia.