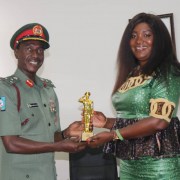 Ministry of Foreign Affairs and International Cooperation, Tower Hill, Freetown, 29th, November, 2021. The Deputy Minister of Foreign Affairs Madam Mamadi Gobeh-Kamara has met with delegation from Organization of Military Sports in Africa who are on a planning visit for their next general assembly which will be hosted in Sierra Leone by 2022. 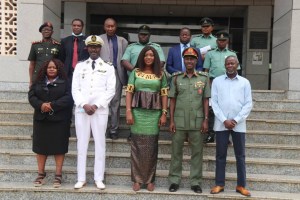 According to the head of delegation, Brigadier General Maikano Abdullahi, the courtesy call on the Deputy Minister was to engage and crave on the Ministry’s indulgence to help facilitate the invitation of their delegates for their next general assembly.

The organization also presented a proposal for His Excellency the President, Rtd. Brig. Julius Maada Bio to donate a trophy in one of the sports disciplines which will be named after him for the 2022 military sport which will involve the 51 member Countries of the organization. 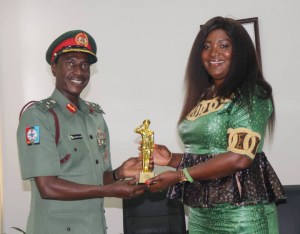 The Deputy Minister in her succinct statement, welcomed the delegation and expressed her delight over the military organizing itself to internationally compete in sports.

” Sierra Leone is a sport loving nation, and our President is a fan of sports. This is important in view of the need for members of the armed forces to unite in the spirit of camaraderie and goodwill” she stated.

She assured the organization of Government’s fullest support and the Ministry’s willingness to provide whatever positive support that will enhance the general assembly become successful event.