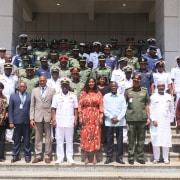 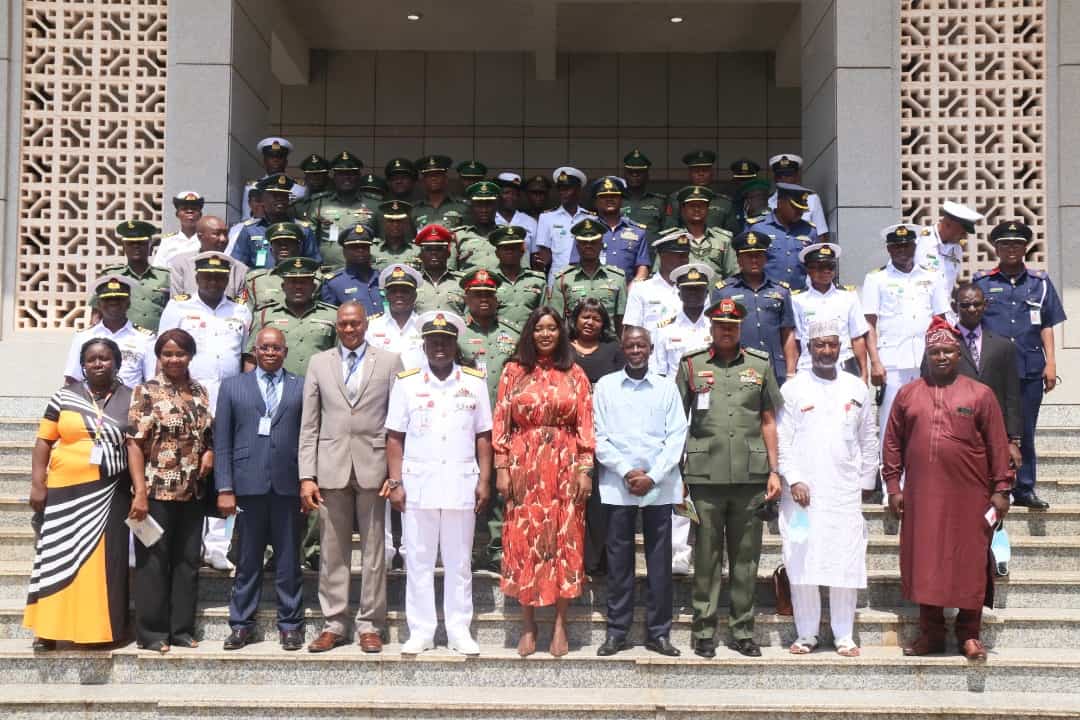 The Deputy Minister of Foreign Affairs and International Cooperation, Madam Mamadi Gobeh Kamara, on Monday 17th May 2021, hosted at the Ministry’s main Conference Hall, Tower Hill, a delegation from Nigeria National Armed Forces Command and Staff College who are on a study tour spanning from the 15-23 May 2021.

During the opening program, the Deputy Director of the Africa Directorate, Mr. Henry Nyandemoh, said that the Ministry had earlier hosted another delegation from the Nigeria Defense College. They conducted a study tour on Sierra Leone’s Foreign Policy and its relation to its national development. He explained that this delegation’s visit is focused on understanding how Sierra Leone handled the Ebola epidemic and now responding to the COVID-19 pandemic.

Giving the purpose of the visit, the Team Leader of the delegation, Commodore Monday Apeh Abbah, expressed the team’s warm appreciation for the hospitality accorded them by the Ministry of Foreign Affairs since their arrival.

He explained that the College is a joint service institution for training operational and tactical level officers from the Nigeria Armed Forces and other government parastatals in their country. Moreover, that the College also trains Military officers from around the world. Mr. Abbah stated that as part of the College’s curriculum, senior participants from advanced courses are allowed to participate in a study tour of selected African countries annually. He elaborated that the visit enables their students to learn how individual governments handled specific issues, emphasizing a particular theme for each visit.

He said the 2021 theme is “National Efforts towards Improved Regional Security, COVID-19 in Perspective”. The students, he furthered, were expected to carry out detailed research in the country of visit and develop possible solutions of how the host country would have done it better.

Commodore Monday Apeh Abbah informed the meeting that the delegation is in the country to study the methods used by the Government in effectively handling the Ebola pandemic and the deadly COVID-19 pandemic.

Madam Gobeh Kamara expressed delight to have received the fifty-two man contingent, comprising senior military officers, academics, and diplomats. She stated that the study tour is indeed an essential aspect of the delegation’s course package, allowing them the opportunity to learn various techniques different governments use to handle issues. She assured the team that their study tour theme would be adequately dealt with by the competent authorities they would be meeting.

The Deputy Minister expatiated on Sierra Leone’s tremendous strides since the end of the civil war in 2002. She stated that the country can now be viewed as an example for many other countries challenged with difficulty in post-conflict transition. She highlighted that the nation now enjoys a consolidated democratic political system, improved security, a solid basis for decentralized governance and a sustained donor engagement.

Madam Gobeh-Kamara concluded by emphasizing the importance of collaboration in addressing the various challenges posed by the pandemic as the world has entered into the realm of vaccine diplomacy.

Present at the meeting were Directors, Deputy Directors from the various Directorate and staff of the Ministry of Foreign Affairs and International Cooperation.