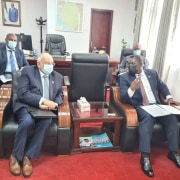 Sierra Leone’s Foreign Minister, Professor David John Francis has on Monday 10th August, 2021 assured Chancellor Dinesh Shukla of America International University of Government’s support to the Private sector in promoting Sierra Leones’ Education.
Welcoming Chancellor Shukla, Professor Francis thanked the Sierra Leone High Commissioner to The Gambia H.E Lucrecia Mariam Shereef for the good leadership. He said education is at the heart of His Excellency President Julius Maada Bio and the New Direction Government’s agenda. He mentioned the Government’s Proactiveness in allocating 21% of the National Budget to education.  Stating that, millions of children in Sierra Leone have benefited from this progressive reform by President Bio.
The University according to Chancellor Dinesh Shukla will be model in line with the United States system of education where at a given point  of their studies, Students  in the medical sector particularly will be obliged to sit to some International US based examinations.  He revealed that they shall be offering a wide range of programmes such as Medicine, Pharmacy, Nursing management and information technology among others. The mission of the University according to him is to provide curriculum that tailored to meeting the requirements of industries and train students to be academically, practically and professionally prepared to hit the ground running in the Medical industry.
He said the Board of Directors at the America International University have already approved the establishment of the University in Sierra Leone.
https://secureservercdn.net/166.62.112.107/55m.202.myftpupload.com/wp-content/uploads/2021/08/image_6483441-8-e1629303370775.jpg?time=1652888353 593 700 Altina Korosa https://secureservercdn.net/166.62.112.107/55m.202.myftpupload.com/wp-content/uploads/2018/05/Mfaic_Logo-e1597236915684.png Altina Korosa2021-08-17 15:49:072021-08-18 16:37:27Sierra Leone’s Foreign Minister Assures Chancellor of America International University of Government’s Support, As He Express Interest To Start Operations In Sierra Leone