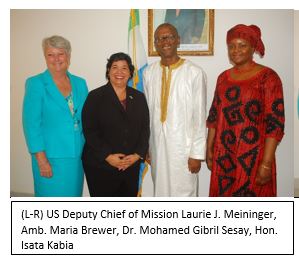 The Acting Minister of Foreign Affairs and International Cooperation, Dr. Mohamed Gibril Sesay, has today (19th September 2017), received the Ambassador designate of the United States of America to the Republic of Sierra Leone, Mrs. Maria Brewer in a ceremony held in the Ministry’s conference hall, Tower Hill, Freetown.

Dr. Mohamed Gibril Sesay, for and on behalf of His Excellency Dr. Ernest Bai Koroma, the Government and people of Sierra Leone, heartily welcomed the US Ambassador designate to Sierra Leone and wished her success in executing her mandate. He assured her of the full support of the Ministry of Foreign Affairs both at bilateral and multilateral levels.

The Acting Minister described the Ambassador designate’s appointment and assumption of office as timely, given the numerous challenges the country has undergone from the civil war, the Ebola scourge and the recent August 14 mudslide and flood disaster in Freetown and its environs. These challenges, the Acting Foreign Minister maintained, have diverse effects on the socio-economic development of the country. The Government he said, is currently focused on improving the livelihood and economic situation in the country.

Dr. Gibril Sesay lauded the numerous assistance and support the USA has offered to Sierra Leone, particularly in enhancing not only the diplomatic relations, but also in the promotion of democracy, good governance, human rights, agriculture and food security through USAID.

The US Ambassador designate said, ‘I look forward to frequent, cordial and frank discussions with the government of Sierra Leone, so that together they can achieve their shared goals and uphold their common values.  Please be assured that we share deeply the same interest in having Sierra Leone be an ever more peaceful, secure, democratic and prosperous member of the community of nations’, Ambassador Maria Brewer concluded.