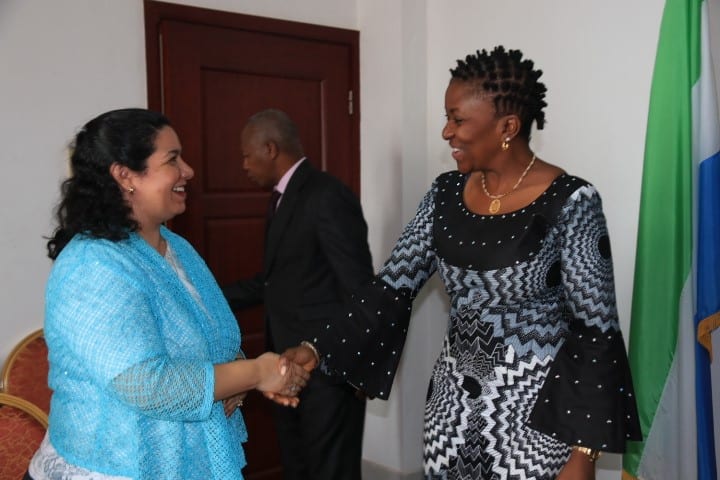 The US Ambassador to Sierra Leone, Her Excellency Maria E. Brewer on Wednesday 19th June, 2019 called on the Hon. Minister of Foreign Affairs and International Cooperation, Mrs. Nabeela Tunis at her Tower Hill office in Freetown.

In her opening remarks, Ambassador Brewer congratulated the newly appointed Minister of Foreign Affairs and International Cooperation on her new assignment; adding that she had had a very good warm relationship with the Minister at the Ministry of Planning and Economic Development.

The two countries, Ambassador Maria Brewer said were linked by the history of slavery in the United States, an institution she said that sent large member of African slaves from present day Sierra Leone to the colonies of Georgia and South Carolina. She assured the Minister of her country’s continuing support to Sierra Leone.

Welcoming the Ambassador to her Ministry, the Hon. Minister of Foreign Affairs and International Cooperation, Madam Nabeela Tunis said that, the US and Sierra Leone relationship today is affable, with cultural ties between groups in the two countries receiving collective historic interest. She thanked the Ambassador on behalf of the Government of President Julius Maada Bio and the people of Sierra Leone for the numerous U.S bilateral support in the areas of consolidation of peace, democracy and human right, health, education among other aid.

The Minister also talked on the bilateral economic relationship between the two countries adding that her staff had briefed her on the Ambassador’s supportive stance towards the Ministry. She said as Minister and Deputy Minister, they are going to serve and maintain the high level of cooperation between the two countries adding that, the meeting with the Ambassador was a demonstration of the importance they attached to the country’s bilateral relations with the USA.