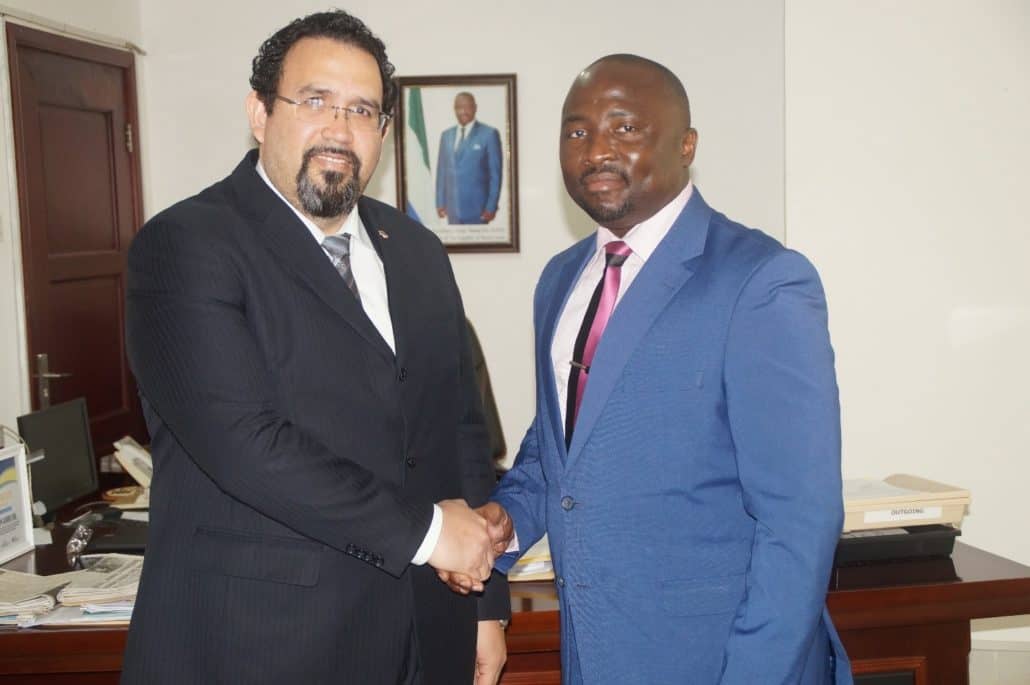 The Special Envoy from the Embassy of The Bolivarian of Venezuela accredited to Sierra Leone, Liberia, Chad and ECOWAS, His Excellency David Nieves Velasquez Caraballo on Tuesday 16th July, 2019 called on the Acting Minister of Foreign Affairs and International Cooperation, Hon. Solomon J. Jamiru ESQ at his Tower Hill Office in Freetown.

In his statement, he gave a brief update about the Non- Aligned Movement (NAM), which he said, is a forum of about 120 developing world states that are not formally aligned with or against any major power bloc adding that, it is the largest grouping of states after the United Nations.

He said since the formation of the organization, NAM has been holding several conferences in different countries and that this year, his country, Venezuela will be hosting the Ministerial Meeting of the Coordinating Bureau of the Non-Aligned Movement scheduled for the 18th – 21st of July, 2019 in Caracas, Bolivarian, Republic of Venezuela.

His Excellency Caraballo said during the Ministerial meeting, the Foreign Minister of Venezuela will meet with colleague Ministers and Representatives to discuss issues that will further strengthen and deepen the bilateral ties.

He said Sierra Leone and Venezuela has been sharing strong bilateral ties and that his country has been providing aid in the area of education among other areas.

The special Envoy added that, his country is very willing to continue to strengthen and deepen the bilateral relationship with Sierra Leone by investing in the areas of education, mining, tourism, oil, economic and diplomacy.

In his response, the Acting Minister, Hon. Solomon J. Jamiru ESQ, welcomed the Special envoy and conveyed on behalf of His Excellency President Dr. Julius Maada Bio and the people of Sierra Leone, his sincere sentiments and commitment in strengthening and deepening the bilateral cooperation between the two countries and extended same to His Excellency, Nicolas Madura President of Venezuela.

Acting Minister Jamiru stated that, the visit of the Special Envoy indicated a very strong commitment of the Government of Venezuela to continue to strengthen and deepen the bilateral ties with Sierra Leone.

He said within the context of political and economic situation, it is important that Venezuela has such an important coalition of friendly relations with countries.

Minister Jamiru thanked the Government and people of Venezuela for making Sierra Leone one of the beneficiaries of scholarship opportunities in higher education across a range of different disciplines including medicine.

He entreated that Venezuela continue to favorably consider Sierra Leone to benefit from such cooperation and opportunities.

He noted the interest of Venezuela in exploring opportunities in the country in the agriculture, oil and other sectors, adding that it’s important for him to note that, the country has formulated the Mid Term National Development Plan that contained 8 important clusters including Human Capital Development and Education which are pivotal in the ‘New Direction’ Government.

He said as a government they have rolled out the Free Quality Education for primary, junior and senior school pupils which is currently benefiting about two million children in the country; adding that it will be important for Venezuela to consider how such an important cluster defining the country’s national development agenda could be factored within the portfolio of opportunities for Sierra Leone.

He concluded that as a government, they are committed in ensuring that the two countries continue to strengthen their bilateral ties.