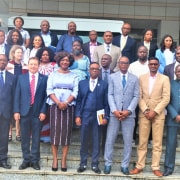 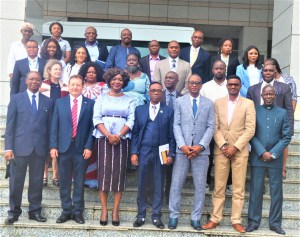 According to the Minister of Education, Prof. Alpha T Wurie, the project will cover four districts, which includes: Koinadugu, Kono, Kailahun and Bonthe. He said the program involves Entrepreneur skills that deals with technical, Vocational education and training. Prof. Wurie said the cooperation will focus on health care services, Agriculture, education and Youth employment. He thanked the German Ambassador for his leadership. 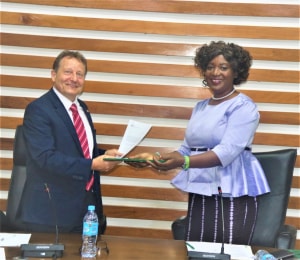 The German Ambassador to Sierra Leone, Amb. Horst Gruner, said the Government of Germany was determined to strengthen the Long-standing, diverse and friendly relations between Sierra Leone and Germany. He said the project will cost about 15.7 million euros. This he said will cater for the different sectors highlighted in the agreement. He thanked the Government of Sierra Leone for the good diplomatic relationship.
The Deputy Minister of Foreign Affairs and International Cooperation, Madam Mamadi Gobeh Kamara in her remarks expressed her appreciation on behalf of the Government of Sierra Leone to Government of the Republic of Germany for their Continues support to ensuring sixty years of excellent bilateral relationship between the two Countries. She said the two Countries have coordinated many mutually beneficial projects and programs. The honourable Deputy Minister Commended the invaluable German Agency for International Cooperation (GIZ) for their tremendous efforts over the years in supporting adult education, private sector development, youth empowerment, support to Government and economic growth and the organization of the financial sector.

“Today’s ceremony is an outcome of the signed technical cooperation agreement of the 13th September 1963, and amended on the 12th May 1974. The terms of this cooperation entail two important projects, the health system strengthening and Youth employment.’’ She stated

The Deputy Minister reassured the German Ambassador of the Government of Sierra Leone’s willingness to implement the two projects in the Ministry of Health and Ministry of planning and Economic Development.

She said the signing of the agreement was a true commitment that both Countries were ready for excellent bilateral cooperation. In conclusion, the Deputy Minister expressed appreciation to the German Government for it continuous support to Sierra Leone. 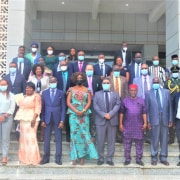 Ministry of Foreign Affairs and International Cooperation, Tower Hill, Freetown, 20th September, 2021. The Deputy Minister of Foreign Affairs and International Cooperation, Madam Mamadi Gobeh Kamara has met with a delegation from the Africa Union Border Support Team who are on an independent assessment of the Yenga Border dispute between Sierra Leone and Guinea. A situation that has existed for over two decades. 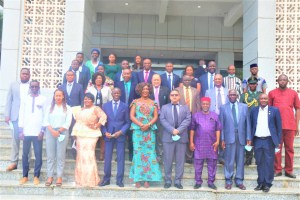 The leader of the delegation and focal person, Mr. Grant Herbert expressed his appreciation to the Government of Sierra Leone for extending to the AU a request for an amicable resolution of the Yenga issue between their country and neighboring Guinea. This he said was the African way to go.

“African problems must be resolve in Africa and by Africans’’. He stated.
He assured the Government of Sierra Leone of an independent, credible and comprehensive report on the Yenga issue after their findings. 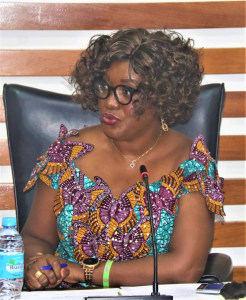 The Deputy Minister of Foreign Affairs and International Cooperation, Honorable Mamadi Gobeh-Kamara welcomed the delegation from the Africa Union to the Ministry on behalf of His Excellency the President of Sierra Leone, Rtd Brig. Julius Maada Bio, and also the Minister of Foreign Affairs, Professor David John Francis, who she said was away on an official assignment. She continued by conveying Government appreciation to the Africa Union for all they have done and continue to do to make Africa a continent everyone aspires to be part of. 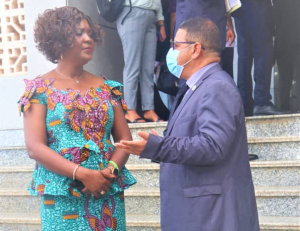 The Deputy Minister said Sierra Leone and Guinea share long history of bilateral relations, but that many footless efforts has been made in order to peacefully resolve the Yeaga issue. She reaffirmed Government’s believe in a peaceful coexistent, while assuring the delegation of Yenga being Sierra Leone’s territory.

“We are hoping as a Country and Government that the reports of your findings after this visit will give recommendations on how we can progress on a win – win outcome”. She concluded. 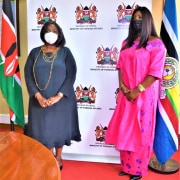 During their discussion, Madam Gobeh Kamara expressed thanks and appreciation to Cabinet Secretary Omamo for the exceptional hospitality given to her delegation since their arrival in Kenya and conveyed fraternal greetings from the Minister of Foreign Affairs and International Cooperation of the Republic of Sierra Leone, Professor David Francis. 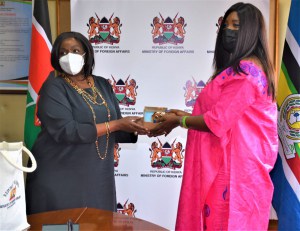 Madam Gobeh Kamara also recalled the remarkable role played by the Kenyan forces during the civil war in Sierra Leone which ended in 2002. She referred to the close historical ties between the two nations from their membership in the Commonwealth to the shared responsibility as African Union (AU) Committee of Ten (C-10) Member States for the Reform of the United Nations Security Council (UNSC). She further highlighted the bond and mutual respect between their presidents which was climaxed by the warm hospitality extended by His Excellency President Uhuru Kenyatta to His Excellency President Maada Bio during the latter’s private visit to Kenya in 2019. Other areas of collaboration by the two sister countries which Madam Gobeh Kamara alluded to include the recent successful Global Partnership for Education Summit in the United Kingdom, membership of the C-10 on the Reform of the UNSC and conveyed gratitude to the Republic of Kenya for the donation of twenty thousand tablets and power banks to facilitate the conduction of the Mid- Term Population and Housing Census in Sierra Leone. 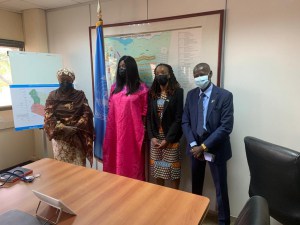 Continuing, Madam Gobeh Kamara said, ‘’it is against this backdrop that His Excellency President Julius Maada Bio upgraded our diplomatic presence in this hub of East Africa from Consular level to High Commission. We look forward to the signing of the Joint Commission for Cooperation to enhance and bolster progress in many fields including the Memorandum of Understanding (MoU) between our two Ministries of Defence.”

Seeking the Republic of Kenya’s support, the Deputy Minister informed the Cabinet Secretary of Sierra Leone’s bid for a Non-Permanent Seat at the UN Security Council for the term 2024-2025.

Commenting on pending issues, Madam Gobeh Kamara stated the intention of His Excellency President Julius Maada Bio official visit to Kenya on the invitation of President Kenyatta. She noted that plans for this visit had been instituted , but the Covid-19 pandemic put a stall on those plans. However President Bio will honour his friend and brother’s invite and the date and necessary action will be communicated to the Kenyan Government in due course.

In her response, Madam Raychelle Omamo welcomed the Deputy Minister and delegation reiterating the historical relationship in the area of peacekeeping in Sierra Leone noting that she was actively involved in those efforts during her role as Cabinet Secretary for Ministry of Defence. She assured the Deputy Minister of Kenya’s unwavering commitment in respecting and strongly maintaining the bilateral ties between Sierra Leone and Kenya. She further maintained that Kenya will forever be on hand to positively respond to both the current and emerging issues between the two countries, adding that Sierra Leone should always count on Kenya’s endorsement on any support needed.

In consideration of His Excellency President Bio’s desire to replicate the wildlife sanctuary of Kenya in Sierra Leone as a way of boosting the tourism sector, Madam Gobeh Kamara used the opportunity to visit Nairobi National Park, which according to the Cabinet Secretary has contributed immensely to boost the economy of Kenya. The Nairobi National Park is the first established wildlife service in Kenya and in East Africa.Its vegetation is mainly savannah, with open grass plains and scattered acacia bush. It is one of the protected animal sanctuaries close to the capital city. The park comprises a large variety of animals such as lions, leopard, Cheetah, black rhinos, cape buffaloes, hippos, giraffes, zebra, antelopes, baboons and over 400 bird species. It is one of the tourist attractions in Kenya

In another engagement, Madam Gobeh Kamara and delegation also paid a courtesy call on the Under Secretary General and Director-General of the United Nations Office at Nairobi, Madam Zainab Hawa Bangura at her office in Nairobi following a visit to and meeting with the Sierra Leone High Commission staff at the chancery. 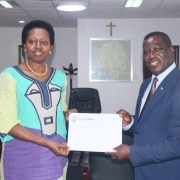 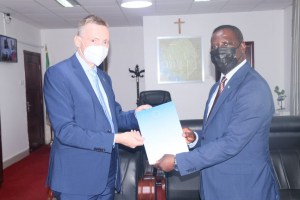 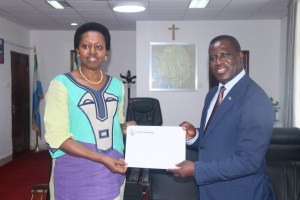 The Ambassadors and High Commissioners designate commended the Government on what they referred to as proactive Governance and efficient policy reforms that has added more value to the Country’s democracy. The establishment of the Peace and National Cohesion Commission, the abolishment of the death penalty, the amended Public Order Act 1965, which repeals the 55-year-old seditious libel section that criminalized free speech, were among the gains highlighted. 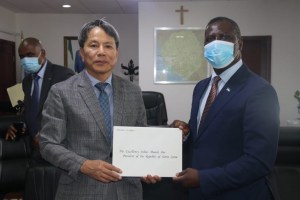 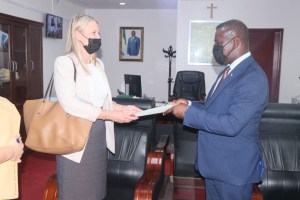 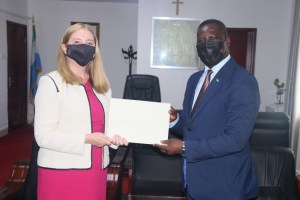 On behalf of the Government of Sierra Leone, Professor David Francis welcomed the Ambassadors and High commissioners as he formally received copies of their credentials. He reiterated the Government of Sierra Leone’s commitment towards strengthening the longstanding relationships of mutual supports that exists among the various Countries with Sierra Leone. He highlighted series of issues they will be engaging on after their official presentation of Credentials to His Excellency President Maada Bio on Tuesday, 7th September, 2021. Key among those issues geared towards Security Council reforms, Sierra Leone’s Bid for the UN Security Council in the non-permanent category for the term 2024-2025, gender equality and empowerment, SDGs implementation, Education, Agriculture and post-COVID-19 recovery.