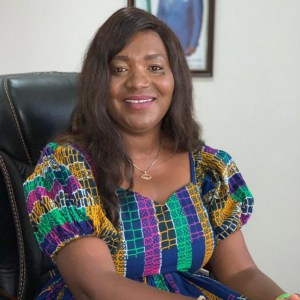 Ms. Mamadi Gobeh Kamara is Sierra Leone’s Deputy Minister of Foreign Affairs and International Cooperation. Prior to her re-assignment to the Foreign Ministry in May 2021, she served as the Deputy Minister of Information and Communications from May 2019-May 2021.

As a Media and Communication professional, Ms. Gobeh Kamara previously worked with the United Nations Observer Mission in Sierra Leone (UNAMSIL), in the Public Information Section. During her work with the UN, she served in various capacities, including as Presenter, Producer, News Anchor and later News Director of the UN Radio. This was the main platform used to share information relating to peacekeeping, peacebuilding, democracy and good governance in Sierra Leone after the end of the civil war. Ms. Gobeh Kamara also worked with the Sierra Leone Broadcasting Service, where she served as Producer and News Anchor for the nation’s broadcaster.

She also served as consultant Managing Director for AYV media Empire, one of Sierra Leone’s leading private broadcasters, with specific responsibility of setting up the AYV Television. Ms. Gobeh Kamara then became producer and lead anchor of a Television Talk show, Mamdi’s Lounge on AYV TV. In that capacity, she was lead facilitator for training and mentoring programs for young female journalists, helping to recruit and trained many.

Ms. Gobeh-Kamara was Communications Consultant for the International Finance Cooperation (IFC), the United Nations Development Program (UNDP), and the Millennium Challenge Coordinating Unit (MCCU) responsible to lead the development and rolling out of Communications Strategies for these agencies. She was Communication Specialist for the World Bank funded Bumbuna Hydro Electric and Environmental Management, Energy Access and the Energy Sector Utility Reform Projects. She was the spokesperson for the Covid 19 Emergency Response center.

She holds a Master’s Degree in Media and Communications from the Leicester University in the UK, Diploma in Mass Communication from the Fourah Bay College, University of Sierra Leone, and a Certificate in Computer Studies from the Institute of Public Administration and Management (IPAM), Sierra Leone.