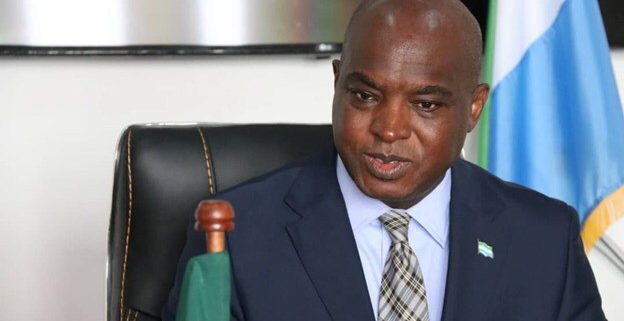 The Minister of Foreign Affairs and International Cooperation, Hon. Dr. Alie Kabba, on Tuesday 23rd April, 2019 left for Conakry, Guinea to meet with the President of Guinea, His Excellency Prof. Alpha Conde to deliver a letter from His Excellency, President Julius Maada Bio and will also meet with his Guinean counterpart, Hon. Mamadi Toure to emphatically and comprehensively present Sierra Leone’s concerns on the issue of Yenga, land and maritime encroachment along the Sierra Leone-Guinea border points of Gbpane Kandor, Soa, Mafindor, Kaadu Village, Kabuya Village among others.
The aged-old issue of Yenga remained unsolved, irrespective of the acknowledgement of Guinean authorities in 2005 that the town belongs to Sierra Leone.

The consensus of Guinea to fully hand over the territory is yet to be fulfilled and the town is still being used by the Guinea Armed Forces and other Guineans for numerous activities including illegal mining.

Several Government reports have indicated that the Guinean Armed Forces are illegitimately moving into and occupying border towns in Sierra Leone, thus encumbering the free movement of Sierra Leoneans within their country and across the borders.

The issue of land and maritime infringement has dawdled for several years and has been addressed at various levels of government including the Presidency.

Recently, there has been a renaissance and increase of land and maritime encroachments on the Sierra Leone border by the Guinea Armed Forces and other Guinea official personnel operating within those axes.