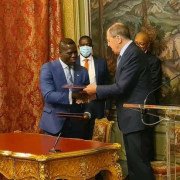 During his one-day working visit to Moscow, Russian Federation, Sierra Leone’s Minister of Foreign Affairs and International Cooperation Prof. David J. Francis together with his counterpart Sergey Lavrov, signed a Memorandum of Understanding for a ‘Visa-free Movement’ of holders of both Diplomatic and Service passports to facilitate the movement of people between the two countries.

Signing on behalf of the Government of Sierra Leone, Professor Francis appealed to HE Lavrov to consider reopening their embassy in Sierra Leone to facilitate the movement of people between the two countries.

He continued: “It is a pleasure to be here and thank you very much for extending an invitation to me, to visit this historic country and this historic and beautiful city-Moscow. That in itself is a testimony of the very strong and credible partnership the two countries share”

“Your Excellency, this is my 3rd visit to this historic and beautiful city. In 2019, in my previous role as Chief Minister, I had the privilege to lead the Mines and Mineral delegation. I was also part of His Excellency, President Julius Maada Bio’s delegation to the Russia-Africa submit here in Sochi.

“Your Excellency, I want to use this opportunity to also convey sincere and kind greetings from my President HE Bio to you as well as his brother and colleague President Vladimir Putin”

“This visit is in itself historic because it is my 1st outside Sierra Leone as Foreign Affairs Minister. I am here to engage with you on how to build on a very strong and long-lasting partnership that has been in existence for several years. And your Excellency as you already note, this is nearly 59 years of this strong and solid bilateral relation; and next year, we shall be celebrating the 60th anniversary of this very strong lasting relationship”, Prof. Francis noted.

He said: “This is important; and having been sent by His Excellency the President as Special Envoy, to come and engage with you on how to build and strengthen this very strong and existing relationship and to also look for new opportunities where we can work together on a win-win basis. And in terms of trade and investment, and support to international peace and security.

He ended by thanking the government and people of Russia, for their continued humanitarian assistance, human capital development by providing scholarships to over 3 thousand Sierra Leonean students and Russian investments in his country.

“I and my colleague Sergey Lavrov discussed a lot on various sectors including Energy, Agriculture, Health, Tourism and Transportation, which are priorities of President Bio’s New Direction Agenda”.

Russia’s Foreign Minister Sergey Lavrov congratulated Professor David Francis on his appointment as Minister of Foreign Affairs and International Corporation and also welcomed him to Moscow, marking his first working visit in that capacity.

“The relation between Sierra Leone and Russia traditionally has been friendly, founded among equal rights and mutual respect and we intend to develop them in this vain”

“Today, we have got an opportunity to talk about a whole range of our bilateral agenda; to talk about our cooperation within the United Nations and also talk about regional conflict. Above all given the outcome of the participation of Sierra Leone’s President Bio during the Russia-Africa summit.

He commended President Bio for his role in the UN Security Council reform process that is ongoing and as Chair of C-10 of African Heads of State. And for the role, Sierra Leone is playing in peacekeeping missions across the continent.

The two Diplomats agreed to celebrate Russia-Sierra Leone 60th bilateral friendship next year in both Moscow and Freetown.

The delegation held meeting and breakfast with Mr. Valery Krasnov, first Vice President of VI Holdings Group which ended on a very positive note. He promised to continue an expansion of VI Holdings Operations in Sierra Leone.

Sierra Leone’s Foreign Minister thanked them for their continued support to his country through human capital development and offered himself as an academic professor to lecture whenever they need him.

He ended by appealing to them to give more scholarships to Sierra Leone students, especially training in middle manpower courses. According to the minister, there are Technical Vocational institutions in all 16 districts of the country.

The meeting at RUDN ended with a special conference organised to meet Sierra Leonean students and foreign students which was highly commended by all and sundry.

Prof. Francis re-echoed the new shift from Economic Diplomacy to Development Diplomacy in another engagement with Dr. Konstantin Anastasiadi, Chair of the Commission on Foreign Trade – Economic Cooperation of the Moscow Chamber of Commerce and Industry, and business representatives.

Well, the outcome of this engagement will soon be realised in different areas in trade and investment in Sierra Leone.

The long and useful day ended at the Embassy by meeting with a cross-section of the Sierra Leone Community leadership and Sierra Leone students in Moscow.