Investors from the Arab Republic of Egypt to Sierra Leone have met with the Deputy Minister Of Foreign Affairs and International Cooperation, Madam Mamadi Gobeh Kamara at her tower Hill office in Freetown.

The Head of delegation Eng. Osama M.K Abdelhamid in his remark extended warm greetings from his Country and introduced members of his delegation, he continued by stating the purpose for their one week visit to promote businesses by developing the Country. 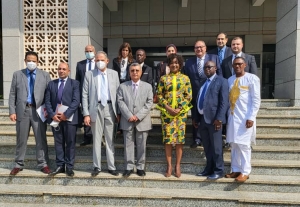 He reiterated that the investments will be based on three companies; the World Wide Base Technology Limited, Pharco Pharmaceutical, African Economic Council/ Pan-African Movement, and Mosa Trade which will be operating in areas such as Energy, Mining, Chemicals and Waste water recycling.

In her response, the Deputy Minister of Foreign Affairs and International Cooperation, Madam Mamadi Gobeh Kamara, acknowledged the steps taken so far by the delegation and applaud them for choosing Sierra Leone as an Investment destination to promote their businesses and further ensured to render necessary support to what is required from the Ministry.

“Investment and Country building has been a top priority to the Government and people of Sierra Leone, and Energy is key to Country development, which is why we are very deliberate to make sure we deliver to our people. She said”

The Honorable Deputy Minister noted that as much as the Country is looking for investors, they are also mindful to only involve in well meaningful investments that will benefit the people of Sierra Leone and in the end accomplish a win-win situation.

She thanked the delegation and reaffirmed the Ministries support to make their stay a successful one.

In finalization of GCM Report, Foreign Affairs, IOM and Others on a round t...
Scroll to top