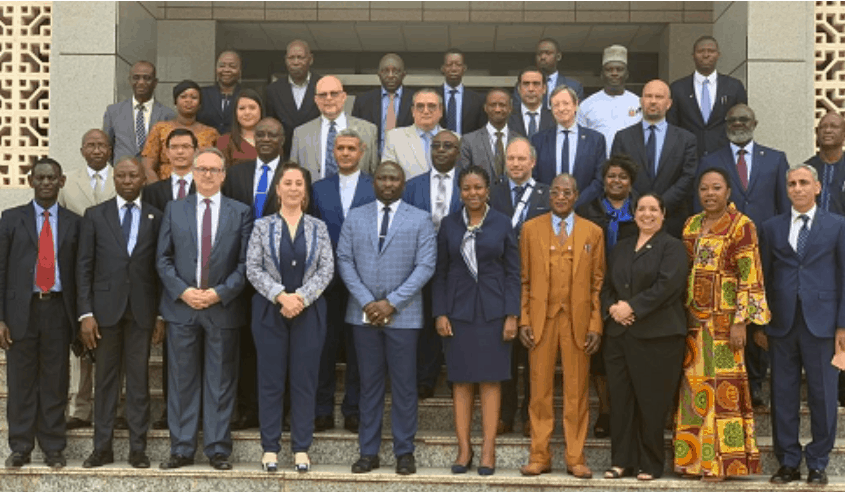 Welcoming the Diplomats, the Director General of the Ministry of Foreign Affairs and International Cooperation, Mr. Al-Hassan Kondeh explained that the purpose of the meeting was for the Minister to update Diplomats on the achievements and challenges of last year and pending activities. He added that the forum also provided the opportunities to engage in development discussions, exchange ideas and maintain regular dialogue.

Delivering her statement, the Minister stated that 2019 was a great year with Diplomatic partners as Sierra Leone strengthened its bilateral cooperation with many of her historic partners. Outlining some of the Ministry’s achievements so far, Mrs. Tunis said the government through the Ministry has signed several joint cooperation agreements that are of benefit to the people and country and that they will continue to collaborate on tangible development programmes across the globe.

The Minister said Sierra Leone has established a good collaboration with its partners in a number of areas such as good governance, water supply, agriculture, environmental protection and employment. Expressing gratitude for the high level of collaboration with partners, Mrs. Tunis stated that, she aimed to engage with the Diplomatic community even further as His Excellency, President Julius Maada Bio has declared 2020 as a year of delivery.

The Sierra Leone Foreign Minister expressed her fervent hope that the Diplomatic partners will individually and collectively continue to support the country’s development priorities especially in education, health, agriculture, water, energy, security and the fight against corruption.

The Dean of the Diplomatic Corps, the High Commissioner of the Federal Republic of Nigeria to the Republic of Sierra Leone, Dr. Habiss Ibrahim Ugbada, in his statement expressed a special appreciation to the Minister for organizing such platform for them to interact. He said the gathering has provided the much needed opportunity to interact, discuss, brainstorm and exchange ideas among members of the Diplomatic Community and the Ministry.

Dr. Ugbada added that he is of the belief that the outcome of the meeting will further unite them as a community and that it will help them to support the vision of the present administration as well as to contribute to making Sierra Leone a better place for not only its citizens but for all citizens of the world residing in Sierra Leone.

The Nigerian High Commissioner noted that for them to maintain peace and sustainable development in Sierra Leone, there is need for constant engagement and constant interaction. He called on his fellow diplomats to continue to come up with ideas and suggestions that can aid the Corps and Government of Sierra Leone.

His Excellency Dr. Habiss Ibrahim Ugbada assured the Minister that the Diplomatic Community under his leadership as Dean, will continue to partner with the Government of Sierra Leone especially in achieving the goals enshrined in the National Development Plan.

Dr. Ugbada informed the Minister that they are about to hold their maiden meeting for this year where they will discuss a range of issues and will share the outcome with the Minister.

Ground Breaking Event for the Construction of ECOWAS Logistics Depot in Lun...
Scroll to top