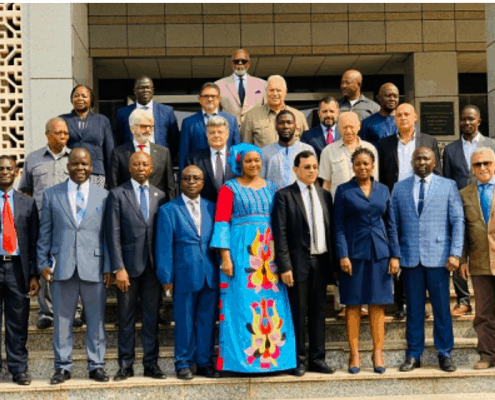 In the welcome statement given by the Deputy Director General-Operations of the Ministry of Foreign Affairs and International Cooperation, Mr. Duwai Lungay said the meeting was to discuss issues on how to facilitate the ministry’s work and that of the Consular Corps; stating that 2020 is a year of service delivery as was pronounced by His Excellency Dr. Julius Maada Bio last week at the Ministerial Retreat.

In her speech at the meeting hall, the Minister of Foreign Affairs and International Cooperation, Mrs. Nabeela Farida Tunis  reassured the Consular Corps of her Ministry’s unflinching support in ensuring that their day-to-today activities are carried out in a smooth and seamless manner. Minster Tunis stated that as part of her Ministry’s multi-dimensional approach to effective delivery on the national transformation driver of His Excellency Dr. Julius Maada Bio, the Diplomatic and Consular Corps of Sierra Leone should direct their individual and collective resources and energies towards supporting the Government priorities in order to deliver tangible results as demand by President Dr. Julius Maada Bio in his Cabinet Retreat speech over the weekend.

She maintained that, as a government, the Diplomatic and Consular Corps are part of Sierra Leone’s brand Ambassadors to help rebrand the image of Sierra Leone from a war-torn and disease ridden nation to paradise of peace, tolerance and abundance untapped potentials in almost all sectors.Mrs. Tunis stated that as brand Ambassadors, the Diplomatic and Consular Corps will contribute immensely to directing tourism and Foreign Direct Investment into Sierra Leone and contribute to the socio-economic development of the country as stated in the Medium Term National Development Plan.

Minister Tunis concluded by encouraging the Consular Corps to hold firmly on the values of integrity and trust as they sought to consolidate the cordial historic relationship that has been in existence between Sierra Leone and their respective countries of appointment.

In his statement, the Dean of the Consular Corps, Adonis Aboud commended the Minister and her team for organizing such a fruitful gathering. Mr. Aboud assured the Minister that, as Consular Corps, they will continue to work closer with the Ministry of Foreign Affairs in order to contribute immensely to the country’s Mid- Term Development Plan.

The meeting was climaxed with fruitful discussions towards national development.

Foreign Minister Updates the Diplomatic Community on 2019 Achievements and ...
Scroll to top