The Minister of Foreign Affairs and International Cooperation, Dr. Alie Kabba has on Tuesday 5 June 2018, assured members of the Diplomatic and Consular Corps, UN agencies and other multilateral organisations represented in Sierra Leone of better cooperation under the New Direction.

The familiarization meeting that was held in the Ministry’s conference hall attracted over forty representatives of the various resident Embassies, Consulates and International organisations in Sierra Leone.

In his opening statement, the Minister of Foreign Affairs and International Cooperation, Dr. Alie Kabba on behalf of His Excellency, Rt. Brig. Julius Maada Bio and the people of Sierra Leone thanked members of the Diplomatic Community for their interest in Sierra Leone underscoring that whilst systematically looking at their respective in-country programmes,  his Ministry will pay close attention to all sectors including: development, health related issues and economic related matters to peace and security; education, women’s issues and that of children; to those people with disabilities all inclusive.

On other cross cutting issues including human rights, the SDGs and global health issues like HIV/AIDs, Dr. Kabba stated that his Ministry will take a critical look at them whilst issues like corruption, migration, human trafficking and terrorism will be treated at the highest level.

The Foreign Minister called on members of the Diplomatic community, Consular Corps and other international agencies to stay on course and follow the principles of the conventions that create the atmosphere that has kept them so well organised together.

‘ I do hope you will all engage me constructively and let us all be rest assured it will be towards the common goal which is the people of this country comes first’, he concluded.

In his response on behalf of the Dean of the Diplomatic Corps, Amb. Wolfgang Wiethoff  assured the Minister of Foreign Affairs and International Cooperation of their cooperation always noting the significant role the diplomatic community has played in enhancing the bilateral and technical cooperation between Sierra Leone and the various countries represented.

Dr. Adonis Aboud on behalf of members of the consular corps assured the Minister of their fullest support in achieving the objects of their new vision- the New Direction.

The meeting was moderated by the Director of Protocol, Mr. Sahr E. Johnny, while the welcome statement was delivered by the Director General of the Ministry of Foreign Affairs and International Cooperation, Mr. Paul Minah.

Present at the ceremony were: the Deputy Minister of Foreign Affairs, Nimatulai Bah-Chang; the Director General, Paul Minah; Deputy Director General for Policy, Dr. Michael S. Kargbo; and Directors of the various divisions of the Ministry. 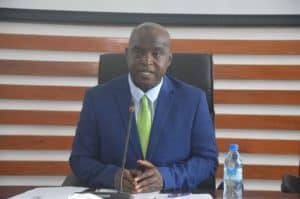 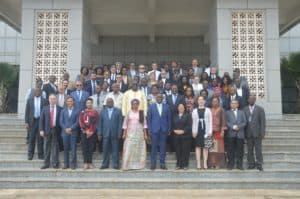